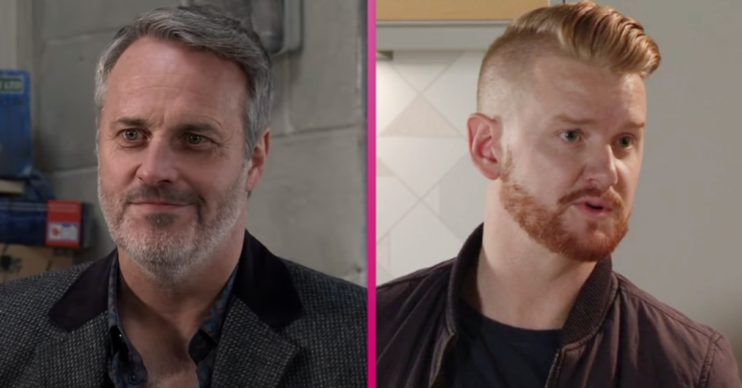 Ray asks Gary to do a job

Coronation Street spoilers reveal Ray and Gary start to team up. But will Gary regret making a deal with the businessman?

Next week, Gary finds himself fed up with the neighbours and Maria urges him to take a job with Ray.

Gary sets out his stall to Ray and points out with him on side, he’ll have an easier task persuading the locals to sell their houses. Ray listens and is quietly impressed.

The businessman tells Gary that the contract is his and his first job is to convince the Platts to sell their house.

Meanwhile David finds Hugo taking pictures of the barber’s. After the incident with Shona, he is threatening to put David out of business.

Gary overhears the conversation and later goes to have a chat with David.

The hairdresser tells him that he’s had an offer on the house from Ray’s property mate which would sort out his financial problems. But he doesn’t want to uproot Shona and the kids.

Gary tells David he should accept the offer but see if he can rent the house back from her.

However, Ray soon tells Gary that he plans to turf David out of the house and Gary can’t help but feel a pang of guilt.

Meanwhile David discusses the situation with Shona and she assures him she’s not bothered if he sells the house, as long as she’s with him.

Later, David thanks Gary for his advice and reveals he’s spoken to Ray’s property friend Roxy and agreed to sell the house on the condition she will lease it back to him.

Knowing that’s not the plan, Gary masks his guilt. Meanwhile Gail is furious when she finds out that David is planning to sell their family home.

David tells his mum that he’s selling the house to an investor who’s prepared to rent it back to them. The sinkhole will be fixed and the kids won’t be uprooted.

However Gail is unconvinced.