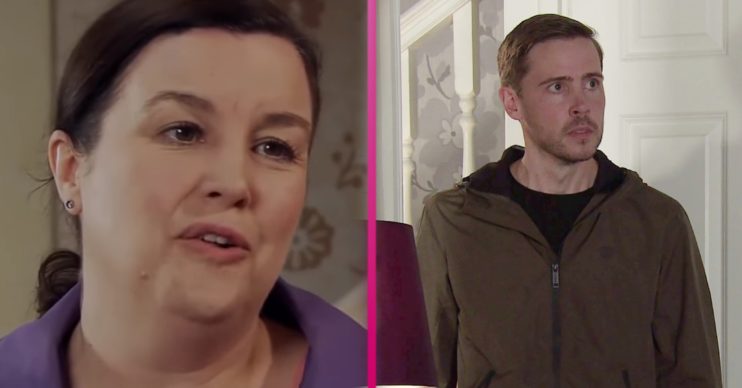 Mick is after Todd!

Coronation Street spoilers reveal Mary and George stage a fake funeral for Todd to get gangster Mick to leave him alone. But will their plan work?

In the upcoming scenes, Sean offers to accompany Eileen to the mortuary to identify the body. But she insists on going alone, knowing that the body isn’t Todd’s and her son is alive and well.

As Todd implores Eileen to go along with his plan, Billy’s horrified to hear from Sean that Todd could be dead.

Awash with guilt, will Eileen wrongly identity the body to save Todd?

Later, Eileen tells a relieved Billy that it wasn’t Todd’s body in the mortuary. She calls her son and tells him she couldn’t bring herself to lie for him and he’s furious.

Eileen ends up confessing to Mary that Todd is alive and well and she’s been meeting with him in secret.

When Mary tells George about Eileen’s predicament with Todd and Mick Costello, George warns that Mick is dangerous.

However George appears to have an idea and decides to call a mate.

Meanwhile, at No.11 Eileen tells Todd how sorry she is for letting him down. Whilst Todd is accepting, he tells her she’s left him with no option but to disappear and she’ll never see him again.

Hearing this, Eileen is left devastated.

Eileen later tells Todd she’s managed to get £1300 together so he can pay off Mick and get on with his life.

However Mary has other ideas and shows Eileen a hearse complete with a coffin and flowers depicting Todd’s name.

George reveals his plan to stage a mock funeral so Mick thinks that Todd is dead.

As Mick arrives, will Eileen go along with the plan?

Coronation Street: Eileen and Todd are held at gunpoint

Todd lets himself into No.11 and starts searching for Eileen’s cash. But when Mick arrives Todd hides.

Mick reveals to Eileen that he and Todd were lovers but Todd stole from him.

When Mick hears a noise, he realises Todd is upstairs and holds them both at gunpoint.

Soon Mick and one of his sidekicks turn up at the furniture store and threaten Gary, believing he is in cahoots with Todd.

As Mick makes his getaway, they almost run over Gail, who furiously takes a picture of the registration plate.

Maria’s horrified to find Gary battered and bleeding in the shop and forces him to tell Craig everything. But where is Todd?