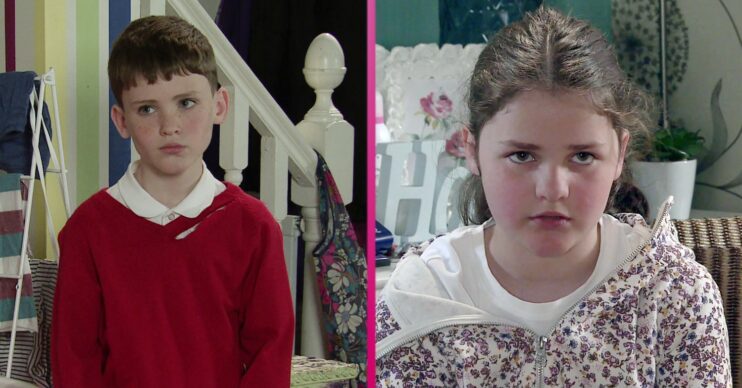 Coronation Street spoilers for next week reveal Joseph and Hope both go missing after it’s revealed Joseph is being bullied at school.

In next week’s scenes Gemma gets Aled ready for his appointment with the audiologist and Joseph reminds Chesney that he needs money for the school trip and a new school jumper.

When Joseph confides in Hope that they’ve got no money to pay for the school trip, Hope gives him Fiz’s purse and tells him to help himself.

Will Joseph take money from his aunt?

Later Chesney and Gemma are shocked to learn Joseph is being bullied at school because they can’t afford to buy him things.

Fiz learns of what’s going on and suggests to Chesney they need to start focusing on Joseph.

Chesney quizzes his son about the bullies at school and offers to speak to his teacher.

However Joseph gets upset, adamant him talking to the teacher will just make things worse.

Chesney goes behind Joseph’s back and the young boy is furious with his dad for breaking his promise and reporting the bullies.

Chesney feels awful and heads out to apologise to Joseph only to discover he’s missing.

After a fruitless search, Ches returns home and reveals Joseph has run away and Gemma calls the police.

The couple report Joseph missing to the police. As the officer heads out, Chesney fears for his son’s safety and scours the street for him.

When Gemma comes out of No.5 and reveals that the police have found Joseph’s jumper, Chesney feels sick.

Hope wonders what’s going on and asks her mum what’s happening. Fiz explains that her cousin has gone missing.

After a night searching for Joseph turns up nothing, Chesney is at his wit’s end.

Dev offers to set up a fundraising appeal so he can offer a reward for information.

Meanwhile Fiz orders Hope to tidy up her room as they have someone coming to value the house.

Hope watches from her window as a tearful Chesney and Gemma make a public appeal for the safe return of Joseph.

Meanwhile, Joseph wanders the street carrying a holdall and a rolled up tent.

Soon Evelyn is horrified to realise Hope has slipped out while her bag was turned.

Having called Tyrone, who says Hope isn’t with him, Fiz is beside herself. Where has Hope gone to?

Will you be watching Coronation Street next week? Leave us a comment on our Facebook page @EntertainmentDailyFix and let us know what you think.