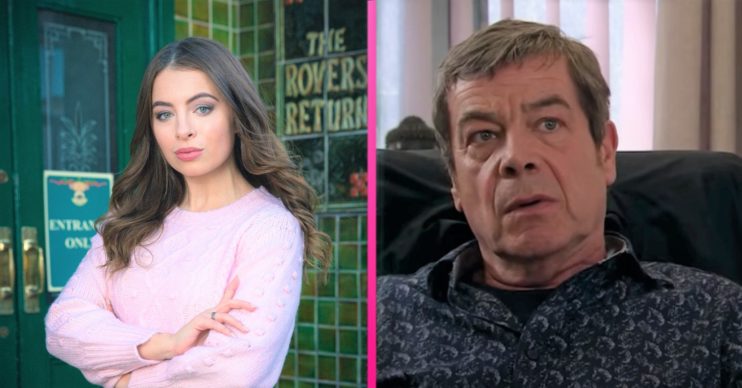 Coronation Street spoilers reveal Jenny’s stepdaughter Daisy arrives on the cobbles. But will it be a happy reunion?

In next week’s scenes Johnny confides in Jenny how seeing Peter hit the bottle has brought home how he ruined the life of the security guard all those years ago as he also turned to alcohol.

Jenny urges her husband to forget about it. But later, Carla finds Jenny in tears. Jenny fills Carla in on Johnny’s crimes.

Later Carla quizzes her dad on his past. But she assures him they’ve both done things they regret.

Margaret later calls in at the Rovers and explains to Jenny she is the mother of the security guard who was injured in the hit and run.

Johnny goes to talk to Margaret and confesses he’s responsible for her son’s death. How will she react?

Johnny fails to make Jenny accept that he’s almost certainly going to prison. Jenny tells Johnny that her stepdaughter Daisy, from her previous marriage, has called and she and her boyfriend will be coming by for lunch.

But Johnny realises he needs to do something drastic to get her to face the music. He announces to Jenny that he wants a divorce.

Soon Daisy and her boyfriend Lee turn up at the pub. However Johnny reveals his and Jenny’s past to Daisy.

He tells her about Aidan’s death, his affair with Liz and how Jenny tried to run her over. Hearing this, Daisy quietly enjoys Jenny’s discomfort.

Read more: Coronation Street SPOILERS: When does Oliver die? All hope is lost for Leanne

The landlady insists to her stepdaughter and Lee that they stay for dinner.

Jenny and Johnny’s row escalates but they’re soon interrupted by the arrival of the police.

The police tell Johnny that they’re arresting him on suspicion of burglary and GBH. Is he going to prison?