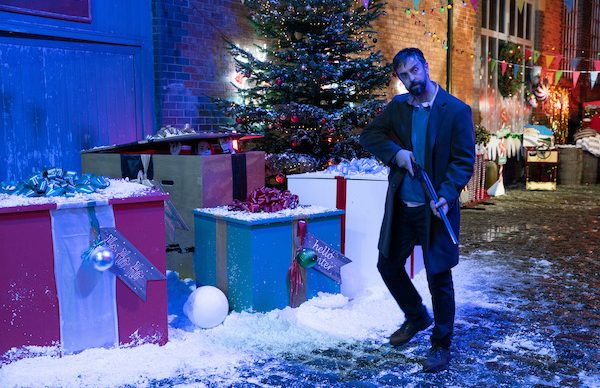 Coronation Street SPOILERS: Death on the cobbles this Christmas!

The festive week’s Coronation Street brings us a Christmas with a difference on the cobbles this year when troubled Derek Milligan turns murderous and unleashes his anger at Gary Windass on the unsuspecting residents of Weatherfield.

As the news that Gary is actually the owner of the factory and not Derek is revealed, Sarah and Nick are left reeling.

However, Gary pulls the wool over her eyes once again when he lies that Derek ran into financial woes as he swooped in like knight in shining armour and helped him out, saving the factory and the workers’ jobs at the same time.

As with all Gary’s other string of lies, Maria falls for the bluff hook, line and sinker… but while she goes to bed that night thinking she has got the perfect man, little does she know Gary has got Derek tied up at the furniture shop, and is about to lock him in over night.

But Derek isn’t the only one to feel Gary’s wrath… because when Nick and Sarah disrespect him, he makes their lives a misery by upping their rent on the spot.

However, this is only the start of the festive drama heading for Coronation Street, because by Christmas Eve Derek has gone into hiding – taking an antique shotgun with him.

Derek gets the chance to plot the ultimate revenge in Gary when Christmas Eve begins and Gary lets him free from his hostage nightmare.

But after sending Derek on his way, satisfied that he has been taught a lesson, Gary is surprised when Fiz turns up to drop off some items from a house clearance – including an antique shotgun.

Read more: Coronation Street SPOILERS: Shona ‘left in a coma after being shot by Gary Windass’

Gary is alarmed when he realises the gun is still live and hides it in a filing cabinet, but little does he know Derek is watching his every move, and soon the gun has gone missing.

As Christmas Day arrives, Weatherfield residents get into the festivities. However their joy soon turns to horror when the Winter Wonderland attraction on the cobbles turns into the scene of a dramatic armed siege.

As Derek vows revenge on Gary for destroying his life, Gary is at the furniture shop and is shocked to see the door open and the gun missing, and is quick to blame Ali.

But as the men row outside the pub, Gary is oblivious to the fact Derek has got the gun trained on him from afar.

Worse for wear, Derek follows Gary into the pub where he looks for him, before causing carnage as people realise he has got a gun.

As Derek fires his first shot, all hell breaks loose in the Rovers as Gary races from the pub and Derek follows closely behind.

As the pair run through the Winter Wonderland, Gary orders everyone to hide. And as the Platts run and hide, Maria arrives looking for her man.

But with someone set to be fatally shot, which Weatherfield resident is about to meet an untimely end on Christmas Day?