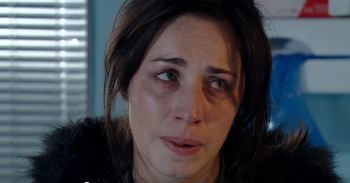 Coronation Street SPOILERS: Shona ‘left in a coma after being shot by Gary Windass’

It promises to be an explosive exit for pregnant actress Julia Goulding...

Shona Platt will be shot and left fighting for her life in a shocking Coronation Street storyline to air over Christmas, according to reports.

As actress Julia Goulding enjoys her maternity leave, her character will be comatose in a hospital bed – as her devastated husband David Platt and family stay by her side hoping for her recovery.

Read more: FIRST LOOK: A dramatic lead up to Christmas in Coronation Street in 10 pictures

According to The Sun Online, popular character Shona will be left in a coma after being shot by Gary Windass in what promises to be an explosive exit for the character.

Shona will be left fighting for survival in her coma with her family devastated at what’s happened.

The cafe worker will be savagely gunned down in dramatic scenes on Christmas Day, when a fight breaks out between Street villain’s Gary Windass and Derek Milligan.

The website reports that the soap has filmed heart-wrenching hospital scenes in which Shona’s new husband David is distraught.

“There is always a battle between Corrie and rival BBC1 soap EastEnders to see who can have the most extreme Christmas Day episode and ITV producers have pulled out all the stops to bring in the most viewing figures.

“It’s a risky storyline touching on gun crime, but it breaks the mould and will have fans talking.”

Another insider added: “Shona will be left fighting for survival in her coma with her family devastated at what’s happened.

“It’s going to be gut-wrenching.”

We know that, with a Winter Wonderland attraction set up in Weatherfield, Shona wants to make hubby David’s birthday extra special after all that they have been through this year.

This week, show boss Iain MacLeod confirmed that Derek will go on the rampage with a gun over the festive season, determined to take out Gary.

He said: “Events of Christmas Day precipitate a really heartbreaking and serious story for the Platts, more specifically for David and Shona.

Not only did she stab her own son Clayton, after being held hostage by him, she also saw partner David sent to jail for his part in stealing grandma Audrey’s money.

Because actress Julia has confirmed she’ll be back on the cobbles, so we can be pretty sure Shona won’t die – but will she be lying in a coma for months?

We have contacted a Coronation Street spokesperson for comment.

Will you be watching Coronation Street on Christmas Day? Leave us a comment on our Facebook page @EntertainmentDailyFix and let us know what you think!