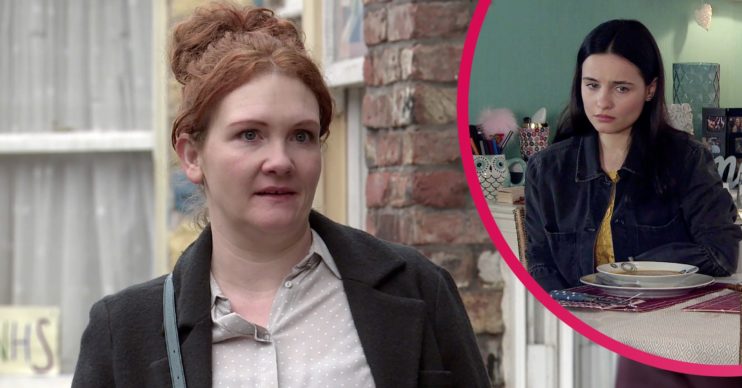 Tyrone has been spending a lot of time with Alina

Coronation Street spoilers reveal Tyrone tells Fiz about his feelings for Alina. But will they be able to save their relationship?

Over the last few weeks Tyrone has been spending time with Alina to help her get her new business of the ground. But it seems the two of them are starting to develop feelings for each other.

In next week’s scenes Fiz mulls over the wedding plans. Meanwhile an oblivious Tyrone is secretly thrilled to find Alina’s cardigan at the garage, giving him an excuse to call round to see her.

But when Seb walks in, his suspicions are aroused. Tyrone and Alina try to convince him that there’s nothing going on.

As Tyrone heads back to the garage Abi and Chesney hide whilst Fiz takes a deep breath and excitedly revealed she’s booked them a Greek wedding.

But it’s not the reaction Fiz hoped for as Tyrone is speechless and can only stare at her. As Abi and Ches emerge from their hiding places, Fiz runs off humiliated.

Back at No.9, Tyrone admits that he has fallen for Alina.

After a pep talk from Chesney, Tyrone assures Fiz that Alina means nothing and she and the girls are his life and he’ll do whatever he can to make things right.

Later Fiz goes and confronts Alina. She tells her she knows all about their moment and if she knows what’s good for her, she’ll stay well away from Tyrone in the future.

Shaken and upset, Alina tears a strip off Tyrone for telling Fiz what happened. She then orders him to keep away from her from now on.

Tyrone’s left in turmoil. Fiz reluctantly agrees to meet Tyrone in Speed Daal. But when Sally makes a dig about Tyrone and Alina, she hurries out, mortified that people know what’s happened.

Later Chesney goes to see his sister and assures her Tyrone’s indiscretion will soon be yesterday’s news.

In a bid to try and get their relationship back on track, Fiz tells Tyrone that she’s arranged for Roy to babysit so that they can spend the evening together.

But when Tyrone cancels, explaining that he has to work late, Fiz tries to mask her hurt.

Soon Fiz calls at the garage with sandwiches for Tyrone. But they both know that she’s really just checking on him.

Will Fiz ever be able to trust Tyrone again?