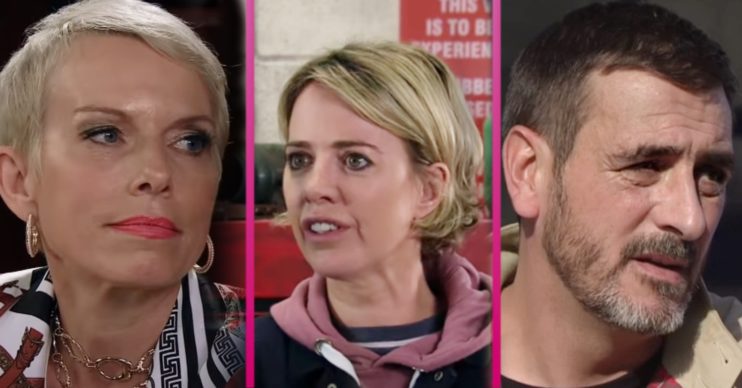 Abi has been struggling with addiction

Coronation Street spoilers reveal Debbie grows suspicious of Abi and Peter. But is she going to get the wrong end of the stick?

After agreeing to go to a meeting with Peter for her addiction, Abi and Peter return back to the cobbles.

Abi thanks Peter for his support. But as Debbie watches from a distance her suspicions are heightened.

Will she confront Abi? Will Abi tell Debbie and Kevin about her struggles?

Last week, Abi had an accident at work in Webster’s Autocentre where a car engine fell on her arm.

The accident caused her to miss saying goodbye to her twins, who are going to live in Australia with their adoptive parents.

Upset, Abi stole morphine from the hospital but Peter saw her taking the medication.

In last night’s episode (Monday, August 24) Peter confronted Abi on taking the morphine. She told him she didn’t take anything and although he seemed happy, when she went to take the morphine it was gone from her bag.

When she confronted Peter in the Rovers yard, he disposed of the medication.

Later this week, Peter calls in at No.11 and tells the mechanic she needs to get some help. Carla is suspicious when Peter lies to her about going to see Abi.

When she finds out he’s helping her with addiction, Carla warns him to be careful as it wasn’t long ago Abi was in love with him.

Meanwhile, Kevin’s sister Debbie turns up at the house with a large suitcase and warns Abi not to mess her brother about. Abi assures her she wouldn’t dream of it.

Coronation Street: Debbie tries to get to know Abi

Later, Abi calls Peter and tells him she’ll attend the meeting later. But as Kevin and Debbie come in, she ends the call.

When Debbie offers to cook lunch, suggesting she and Abi should get to know each other better, Abi has little choice but to accept. But when Abi disappears as soon as she’s eaten, Debbie wonders what’s going on.