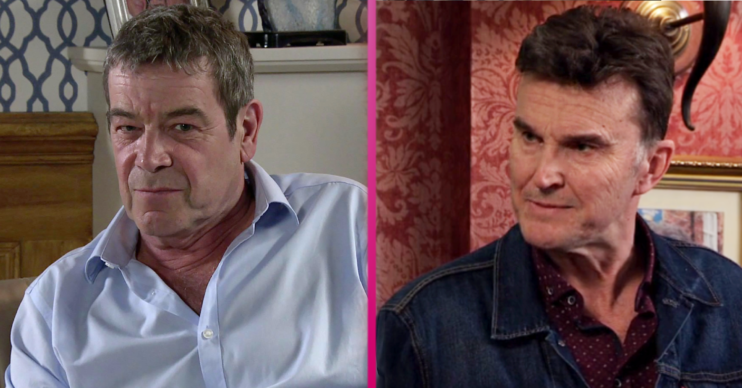 Johnny has been avoiding Scott

Coronation Street spoilers show that Johnny and Scott’s past is revealed next week.

A couple of months ago, Johnny quickly left to go to France after finding out Scott was staying in his B&B. It immediately became clear that the two share a past, but it has remained a secret until now…

In the upcoming scenes a nervous Johnny and Scott discuss the crime they committed over 40 years ago. But what was it?

Later, over dinner Scott amuses Jenny with tales of his and Johnny’s younger days. But Johnny squirms at Scott’s stories.

What happens in this week’s Coronation Street with Johnny and Scott?

In last night’s episode (Monday, August 24) Johnny returned to the cobbles. However he was warned that his wife Jenny wasn’t happy about the fact he let her return alone weeks previously.

Later this week, he assures her that he needed time alone and it won’t happen again.

However Scott tells Johnny it’s time they have a chat and leads him into the backroom.

Ever since Scott’s appearance, fans have come up with numerous theories about his identity.

Whilst some believe he is Carla’s biological dad, another theory is that he’s involved in crime.

Fans already have some knowledge of Johnny’s past. Before his life on the cobbles, Johnny was married to a woman named Louisa.

However he had an affair with a woman named Sharon, and from this affair Carla was born.

Johnny and Louisa went on to have kids Aidan and Kate Connor. But Louisa eventually found out about the affair and ran into the road in an upset state and was run over and killed.

Scott has previously revealed to Carla that he knew of her mum. But what happened with him and Johnny over four decades ago?

What do you think is the crime Johnny and Scott committed? Leave us a comment on our Facebook page @EntertainmentDailyFix and let us know what you think of this story.