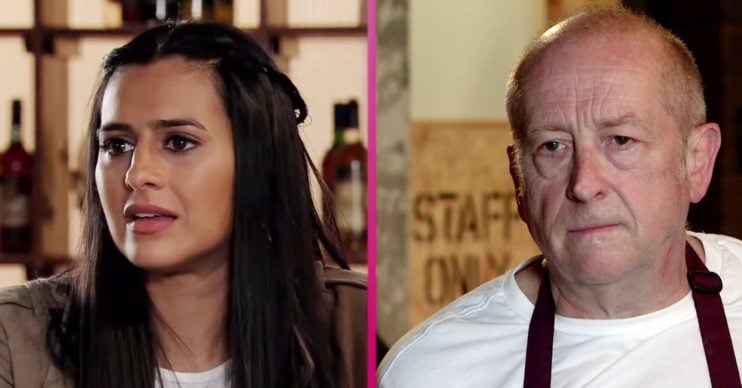 She is planning to destroy Geoff once and for all

Alya Nazir has a secret plan to expose Geoff Metcalfe for good in Coronation Street.

After last week‘s set back of discovering the police had released Geoff and couldn’t use the evidence Tim and Sally found on his laptop, Alya gets desperate.

Knowing her gran is in prison awaiting trial for attempted murder, she knows she needs more witnesses of Geoff’s abuse.

Unfortunately because he kept it behind closed doors, it doesn’t matter who believes Yasmeen – only what they can prove.

However, Alya has got a secret plan to expose Geoff once and for all.

She instructs Yasmeen’s lawyer Imran to call his ex wife Elaine as a witness for the defence, reasoning that if Elaine doesn’t show up – then the police will have to take her disappearance seriously.

That will lead them to whatever it is that Geoff did to Elaine.

The police have so far refused to take her disappearance seriously.

Even when Tim went to her house and discovered it was full of piled up post, they didn’t look for her.

She was last seen terrified as Geoff advanced on her in the alley behind the cobbles.

He was seen later that day destroying the sim card out of her phone, leaving viewers terrified for her.

Actress Paula Wilcox, who plays Eileen, said the fear came flooding back for the character and it could be difficult to get her back.

She told Metro: “I think it’s just the way he speaks to her, everything comes flooding back – the fear, the dread, the horror, the fear for her life comes back.

“And it really is like get me out of here, just let me go away, please let me disappear.”

And she doesn’t know if she’s available as she is filming for another drama in September.

“I really don’t know,” she said of a possible return at a virtual press conference. “It depends how this goes and what happens, because I don’t really know what’s happening.

“I’m doing some shooting on something else starting in September, so I don’t really know what’s next for me.”