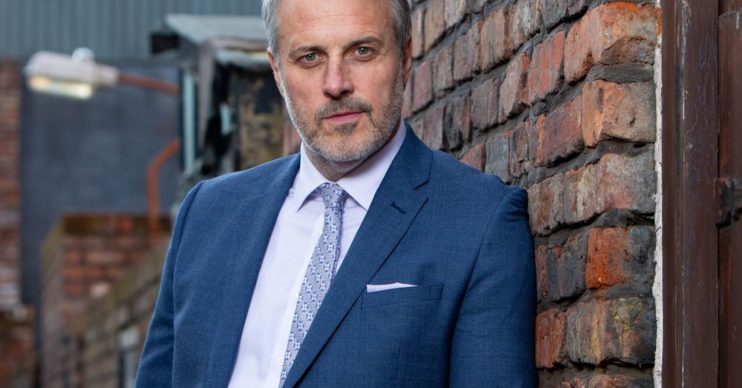 Ray is the new villain on the block

Coronation Street star Mark Frost has told of his upset at his mum not being around to see him star in the soap.

The actor plays evil Ray Crosby in the soap and wishes his mum would have lived to see it.

What did Mark Frost say about Coronation Street?

Speaking at a press Zoom, Mark said: “It was a bit of a family event watching Corrie. We all got together to watch it.

“My mum’s no longer around, she’s been dead for 13 years, but I like to think somewhere she’s having a giggle and a smile, and watching down. I just wish she could be a part of it.

“It’ll be huge, it’s great. Long may Corrie continue afterwards, and it’s just lovely to be a part it at all, really.”

Businessman Ray was revealed to be a major villain on the cobbles on Friday night.

He had a hand in causing the sinkhole to open up in David Platt’s garden – and he wants the house.

Ray is set to play a huge part in the 60th anniversary with his plan for the cobbles. And he’ll go to any lengths to get what he wants.

Coronation Street’s Ray Crosby will burn the cobbles down

“Ray does see himself as an empire builder, so he is looking to purchase property. And get his business to grow exponentially. I think it’s safe to say there’s a possibility of him having overstretched himself, so he’s having to look at things by any means necessary.

“I think what’s going to come as a surprise is just what lengths he’s willing to go to, in order to put his plans in place, and the odds that’s going to put him at with the rest of the Weatherfield community.”

However, he added: “Ray has got no familial links on the Street.

“He sees people and communities as pawns. I think to a certain extent there is that breed of property developer, who in order to get plans drawn up and disband communities, they can’t surely look at people as individuals and human beings.

Read more: Coronation Street fans disgusted as Geoff is released by the police despite camera evidence

“For Ray, sentimentality is a weakness. It’s something he hates and it’s probably something from his childhood.

“He sees the neighbourly love in Weatherfield and people looking out for each other – and he has a distaste for that.

“It probably burns him in a way because he is such a loner, and he doesn’t feel that.”