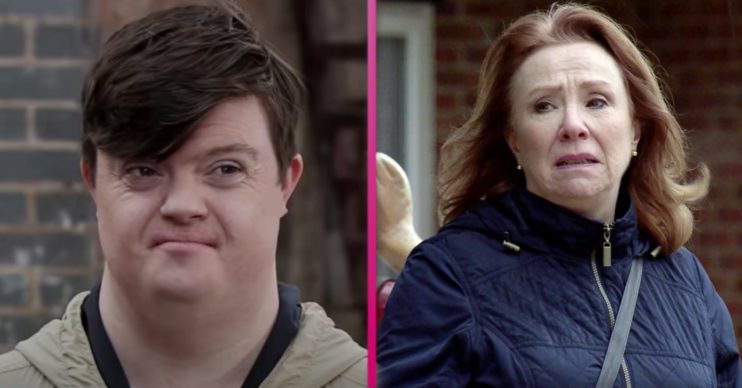 Coronation Street spoilers reveal Alex Warner is targeted by online trolls as he tries to stick up for his aunt Cathy.

Over the last few months, Steve has been trying to raise money and set up an online fundraising page, which is named after his late son Oliver, who died of mitochondrial disease last year.

A couple of weeks ago, Cathy left a nasty comment about Steve and Tracy on the fundraising page and her partner Brian.

In next week’s scenes David lets slip that the corner shop are now selling newspapers and greetings cards.

Soon Brian confronts Dev over stealing business from the Kabin. But Dev is unmoved.

Later Brian and Cathy are shocked and terrified when someone puts a brick through the shop window.

Cathy finally cracks, unable to keep the secret anymore. She tells Tracy and Dev that she was responsible for the nasty online comment, not Brian.

In the café, Tracy launches a verbal attack on Cathy. Cathy soon calls over to No.5 with fish and chips but Gemma gives her the short shrift.

Cathy is crushed as she starts to realising that her friends are deserting her.

She assures Gemma that she regrets what she said online about Steve and Tracy. However Gemma is unforgiving and tells her to stay away in future.

But things get even worse for Cathy when Roy reveals to her that Alex has been trying to stick up for her on social media. However, he’s now being trolled for defending her.

Later Cathy tells Roy that Alex is going to his mum’s in Scotland until all the online animosity has died down. She feels her nephew is being unfairly punished.

Read more: Why is Coronation Street not on tonight? Viewers furious as episodes are moved

Steve later calls in the corner shop and asks Dev to stop stealing the Kabin’s business. Steve calls in at the Kabin and tells Brian and Cathy that he’s had a word with Dev.

But Cathy ends up going online and reads some even more vicious messages.