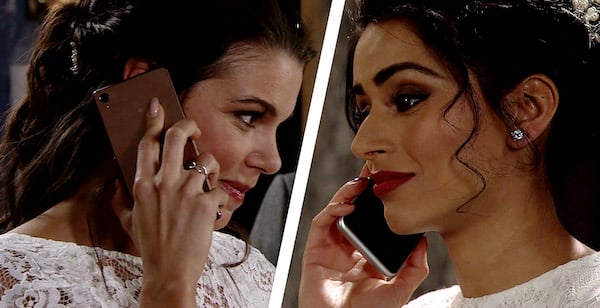 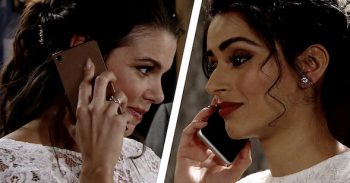 The day that Rana Habeeb and Kate Connor have been waiting for finally arrives next week – but when something happens to jeopardise their wedding, will they get to say the vows that mean so much to them?

Coronation Street fans will know that ‘Kana’ have walked a rocky road in the lead up to their wedding.

First they split at the end of last year after falling out over plans to have a baby, but thankfully reunited at New Year to the delight of soap fans.

But even with their wedding back on, they have still suffered a few set backs thanks to the arrival of Kate’s old friend Lolly.

Lolly’s interference in the wedding plans have set the women on edge, particularly Rana, who can’t help but feel pushed out of the plans for her own special day.

And it seems that Rana’s doubts are continuing as the big day approaches next week… especially when Imran gives her a wedding gift from their mum.

Rana is moved to receive a beautiful bracelet, but it is a stark reminder that she won’t have her own mum by her side as she becomes Kate’s wife.

Kate is understanding and suggests to Rana that they postpone the wedding until Rana can talk her mum round, but Rana’s adamant that she wants to go ahead.

Excited about the prospect of getting married, the brides-to-be get ready as their big day arrives.

As she gets her dress on, Rana even calls Kate to tell her how much she loves her. But as she later puts the finishing touches to her outfit, she is hit by a sudden realisation and rushes out.

But what is playing on Rana’s mind that is more important than her own wedding day?

Looking very much like a runaway bride, Rana heads off. Meanwhile, Kate is at the wedding venue and starts to get nervous when her wife-to-be is late.

Pacing up and down in her wedding dress, Kate is left wondering if Rana has had a change of heart.

Kate’s thrilled when she sees Rana is calling her and thinks all is well… but why is Rana not at the wedding venue like she should be?

As the truth about what has happened is revealed, the wedding is thrown into chaos. Will the nuptials go ahead, or is this the end of the road for Kana?

How do you think Kate and Rana’s wedding day will end? Leave us a comment on our Facebook page @EntertainmentDailyFix and let us know what you think!