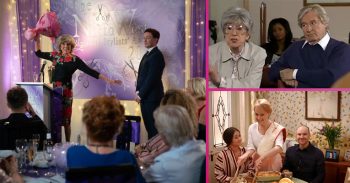 Ancient rivalries, unexpected bunk-ups, delusions of grandeur or just a bit too much booze on their wedding day. In Coronation Street’s hands all have provided hilarious storylines.

It’s a show that has never forgotten that for all the drama of everyday (soap) life there are always plenty of laughs to be had along the way.

Nosy Hilda Ogden, caustic Blanche, all of a fluster Mavis, the buffoon-like Reg Holdsworth are all great comic characters that the show’s writers have got into all sorts of trouble.

And as our round-up reveals there are some stories you can return to again and again.

When Ken though belatedly tried to empathise with his son and attend Peter’s AA meeting at the Rita Tushingham Community Centre, with Deirdre and Blanche in tow, it was Corrie comedy gold.

Naturally it was Blanche who kicked things off by revealing Ken’s recent affair with ‘an actress’. “Oh, it wasn’t Nicole Kidman or Glenda Jackson. She lived on a tugboat.”

Then Deirdre got stuck in and we were treated to a Barlows’ free-for-all. As Peter, head in hands, correctly concluded: “Whatever way you look at it, I’m screwed.”

When barmaid Raquel Wolstenhulme first thought about taking ‘private french lessons’ it was going to be off a woman who had put a little card up in the phone box.

Luckily Ken stepped in and we were treated to one of the show’s funniest and sweetest scenes. Beautifully played by Sarah Lancashire and William Roache it was simplicity itself.

Like Bambi on ice, Raquel tentatively took her first baby steps across the Channel with Ken to guide her. “Je m’appelle, Raquel” is a line that has gone down in soap history.

And there was a great pay-off when we discovered what a cheeky Frenchman Raquel met in Corfu had told her “voulez vous couches avec moi ce soir?” meant.

The sparring between ‘Aud’ and ‘Claud’ aka Audrey Roberts and Claudia Colby is always delicious thanks to Sue Nicholls and Rula Lenska.

Claudia has been winding up her old pal/business rival ever since Lewis Archer first came between them.

Their greatest showdown was at the North West Regional Stylist Awards. Claudia thought she’d enjoy Audrey squirm when she secretly put her up for ‘lifetime achievement’.

Instead it was Audrey, having hit the vino early, who stole the show with a bunch of flowers hurled with pinpoint accuracy at Claudia, followed by a mic drop. Supreme.

Read more: Why Sue Nicholls turned down another boozy storyline

Sally Metcalfe, social climber, is a storyline that has been richly mined for years. When she decided to run for Mayor of Weatherfield Corrie’s writers and the brilliant Sally Dynevor took it to a whole new level.

Dragging long-suffering husband Tim and daughter Sophie along with her made it even funnier as she got them in front of camera on her campaign trail.

“Here’s my gorgeous husband Tim who runs his own successful taxi firm and my wonderful daughter Sophie who’s a committed Christian and lesbian.”

Tim pointed out she was hardly Barack Obama but by then there was no stopping Sal. Well, not until Duncan Radfield framed her for money laundering.

5. Reg, Maureen and the water bed

In typical Corrie fashion that love had been thwarted by the imposing presence of Maureen’s battle-axe mother, Maud, but they had a plan.

Enter Reg and his water bed for a bit of afternoon delight. Unfortunately they hadn’t factored in Derek Wilton and his drill coming up through the floorboards.

Maureen shrieking and Reg sploshing around in his towel whilst Derek and Mavis look on appalled is a sight once seen never forgotten.

6. Gail vs Eileen on the cobbles

The battle between Gail Rodwell and Eileen Grimshaw has lasted longer than the War of the Roses.

Most recently it was Eileen’s murderous husband Phelan taunting (and eventually all but killing) Gail’s husband Michael Rodwell that set them at each other’s throats.

The classic confrontation on the cobbles that first made this such comedy joy was when Gail discovered that Eileen’s son Todd was gay after he’d dumped her daughter Sarah.

Gail went after Eileen like a banshee, only stopping when she caught sight of Todd’s brother, Jason in a builder’s hard hat. “Oh here’s the other one,” she hooted, “The rest of the Village People!”

Drunk Becky was always a winner. She could go any which way once she’d had a few and look out if you were in the vicinity.

The first time she was set to marry ‘Stevie Baby’ McDonald Becky was so excited about things finally going right for her – “I’m flaming loved!” –  that she got absolutely hammered.

Roy and Hayley made a valiant effort to get her to the registrar’s office still vertical but that champagne bottle couldn’t be prised from her grasp.

She tried to style it out as Steve waited and Georgie Fame’s Bonnie and Clyde played but it was game over before the vows.

8. Dev and Deirdre’s night of passion

Really it should never have happened. Dev was Deirdre’s boss and she was still vulnerable after her time in jail as The Weatherfield One.

A large glass of brandy and the prospect of the rest of her life with Ken made Deirdre ponder whether there might be more to life. And there was.

Dev eating Deirdre’s face off then hustling her out once they’d done the deed wasn’t quite An Officer and a Gentleman but it made our Christmas.

It is dangerous to try and best a favourite but Dev (Jimmi Harkishin) in another unlikely romantic entanglement was something Corrie’s writers just couldn’t resist.

This time there was no mutual cauldron of passion. Just a mix-up over the rooms at a health spa that Dev was meant to be enjoying with lady friend Erica till she cancelled.

So they hit the mini-bar and when Dev awoke in his white bathrobe snuggled up to Mary they separated faster than Steve Martin and John Candy in Planes, Train and Automobiles.

“I can’t wait to write a review on Trip Advisor,” said Mary. Brilliantly she was winding him up.

It’s more than 30 years ago but Bet Lynch and Betty Turpin disappearing in Fred Gee’s Rover 2000 into the lake in Tatton Park has lost none of its delights.

Bet built it beautifully as she toyed with Fred who thought he’d got her on a promise until she had Betty tag along. “Some other time, chuck.”

A frustrated Fred threw the picnic rug in the boot, slammed it a little too hard and off rolled the Rover.

Fred getting the ladies back to dry land was a hoot and Bet naturally had the best line: “I never bought a flag for the lifeboats this year. Do yer think I’m being punished?”

What’s your funniest Coronation Street storyline? Leave us a comment on our Facebook page @EntertainmentDailyFix and let us know what you think.