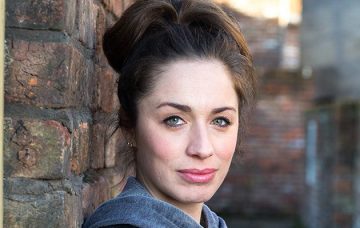 A lot has changed since Nick was last in Weatherfield

Coronation Street’s Nick Tilsley is back on the cobbles, and it won’t be long before he’s receives a devastating bombshell from one of his own family members.

Corrie fans were delighted to see Nick back on their screens after he dashed to be at Leanne Battersby’s hospital bedside in last Friday’s episode after she was struck down by Ronan’s car in his showdown with the Connor clan.

But while his feelings for his ex might have bought him back to his home town, not everyone is going to be thrilled to see Nick back in Weatherfield… mostly his own family.

It soon becomes clear that Nick is hiding a big secret – and next week sees David Platt and Shona Ramsey put on their best Miss Marple act and try to unearth what Nick is keeping from everyone.

According to the official Coronation Street website, things are set to get messy…

“Nick’s panicked when David starts snooping, but things get worse when detective Shona gets on the case. What is he hiding?”

Hmm, could his dark secret have something to do with where he’s been for the last year and a half?

Corrie insiders have revealed: “Nick is all set to abandon David once again, but will his conscience get the better of him?”

While Coronation Street are remaining tight-lipped about what Nick has been up to since leaving the street in June 2017, it’s been rumoured that Nick could have a whole other life going on.

It has been hinted that he’s got a secret wife and that she’s set to track him down to the cobbles within the next few weeks.

Whether the rumours are true remains to be seen, but if Nick does have another family, where does this leave his complicated relationship with Leanne?

Do you think Nick and Leanne should be together? Leave us a comment on our Facebook page @EntertainmentDailyFix and let us know what you think!