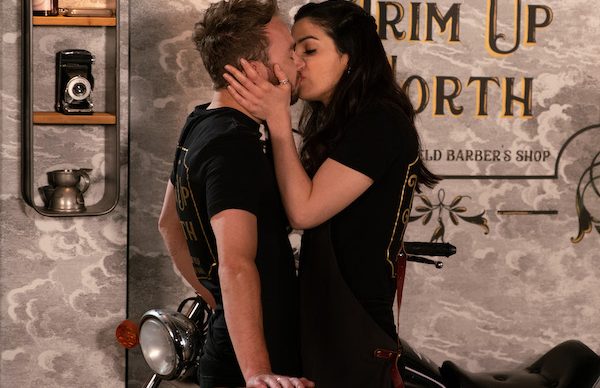 It looks like Shona Ramsey’s worries about boyfriend David Platt growing closer to Natalie are confirmed in Coronation Street next week when the pair share a forbidden kiss at work.

With Natalie part of their scam to steal Audrey’s money, Nick and David have been trying to keep her sweet so that she doesn’t spill their secret.

But as the weeks have gone on, it seems it’s not just a job at the barber shop that Natalie is after.

She has developed a crush on David, and next week she chooses her moment to show him exactly how she feels by kissing him.

Natalie knows she has got the brothers well and truly over a barrel, and has been using their desperation to keep their secret safe to her advantage, even persuading David to teach her how to cut hair.

But Shona hasn’t been happy about the amount of time that David has been spending with the barber shop recruit, and it seems she’s not the only one who has noticed Natalie’s infatuation.

Next week sees Gail warn David that Natalie has got a crush on him and advises her son to keep Natalie at arm’s length.

But with the police still breathing down their necks as they investigate the factory roof collapse, David and Nick realise they have got to do whatever it takes to keep Natalie sweet if they want their secret safe.

When Natalie persuades David to stay late after work to give her some hairdressing tips, she thanks him by cracking open the beers.

But back at home Shona has laid on a fancy dinner for her and David, and is fuming when he turns up late to their romantic meal stinking of booze.

The next day, Shona makes sure Natalie knows that David is taken by turning up at the barbers and inviting David for lunch, before planting a kiss on him in front of Natalie.

But Natalie isn’t one to be deterred by someone having a girlfriend and persuades David to cancel his lunch with Shona so that they can do more hairdressing training together.

Shona isn’t happy that her lunch has been called off and after she heads to the barbers to give David a stern telling off, and Natalie waits until she has left before using the moment to kiss and unsuspecting David.

While David tries to let Natalie down gently, it seems Natalie is about to become the thorn in David’s side when she overhears him talking to Nick about how they need her on side if they want to keep their secret safe.

Natalie winds Nick and David up by agreeing to go on a date with a client at the barbers, knowing full well he is a policeman.

She enjoys the tension that it is causing between the brothers, and isn’t surprised when David turns up at the Bistro when her date is in full swing, just so that he can eavesdrop on her conversation with new man Andrew.

But Andrew doesn’t take too kindly to the fact David is hanging around and confronts the hairdresser, accusing him of fancying Natalie.

But Natalie’s clearly been telling her date some fibs, because Andrew then tells David that he knows that he tried to kiss Natalie… just as Shona walks in and hears everything.

How is David going to get himself out of this one?

Do you think Natalie will come between Shona and David? Leave us a comment on our Facebook page @EntertainmentDailyFix and let us know what you think!