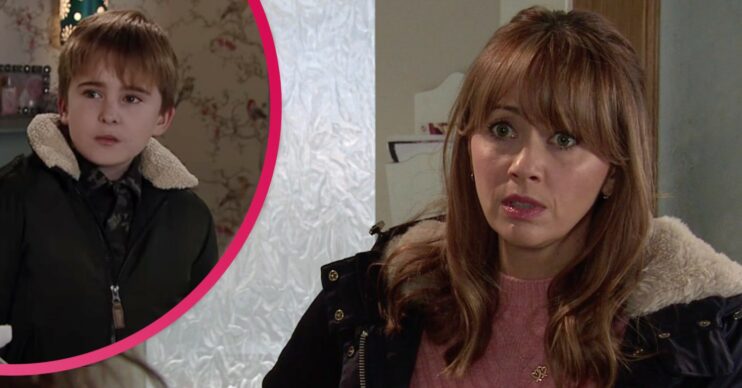 Coronation Street has revealed a new storyline for Maria and Maria’s son Liam Connor Jr, and Samia Longchambon has explained some details of what’s to come.

As revealed in The Mirror, scenes that will air soon will see 12-year-old Liam collapse while playing football in the street. However this leads Maria to take drastic action.

Explaining what happens and Maria’s reaction, Samia Longchambon told the publication: “Liam has had a chesty cough, he’s playing football on the street then suddenly he collapses struggling to breathe.

“He’s taken to hospital and it turns out he’s had an asthma attack.

“The ambulance can’t get down the street because of all the cars, which makes it even scarier. At the hospital the doctor says his asthma could have been caused by pollution and Maria just sees red.

The ambulance can’t get down the street because of all the cars, which makes it even scarier.

“She’s fuming and it becomes her mission to get rid of the vehicles causing the heavy pollution on the street.”

Coronation Street has worked with Asthma UK on the storyline, with data stating that air toxicity is linked to as many as 36,000 deaths a year.

In 2020, a coroner’s inquest concluded that air pollution should be listed as the cause of Ella’s death, the first time that this has happened in the UK.

Coronation Street continues tonight at 7.30pm and 8.30pm on ITV.