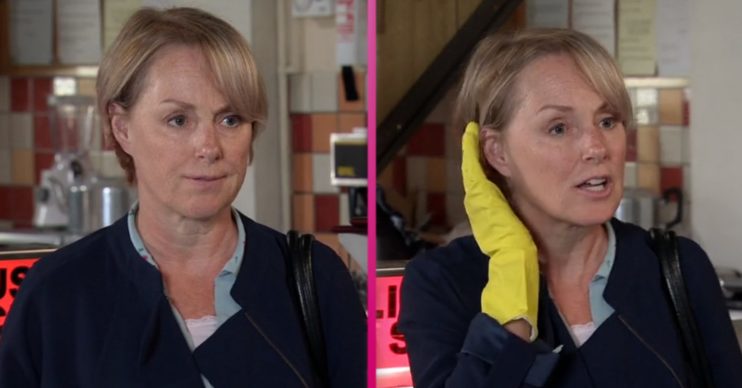 Sally is making sure she's protected from the virus

Over the last couple of weeks, it has become apparent that the coronavirus has hit the cobbles as residents have begun social distancing, wearing PPE and going into self-isolation.

But viewers have noticed one particular character has gone the extra mile to protect herself against the virus.

In scenes in the cafe, Sally wore the gloves to pick up some food from Roy’s cafe. She later wore them around the street as she spoke to Geoff’s first wife, Elaine.

However fans weren’t complaining about Sally’s protective gear and commented how much they loved them claiming they could be ‘a new trend’.

I like how Sally’s got kitchen gloves on #Corrie

In the episode, Elaine introduced herself to Sally as Tim’s mum. She explained she had no reason to lie about her past as Geoff had already taken everything away from her.

Sally realised Elaine was telling the truth and encouraged her to talk to Tim again.

Soon Elaine made her way to see her son when she was confronted by her abusive ex-husband.

But later Alya expressed her concerns when she couldn’t get hold of Elaine. Meanwhile, as Geoff returned home, he had Elaine’s mobile phone.

He took out the sim card and put it down the drain.

Later this week, Faye quizzes Geoff about the woman he was arguing with in the ginnel.

Read More: Coronation Street SPOILERS: A face from Gemma’s past turns up

Geoff lies, claiming she’s a mad woman. He says she has no idea who she is as his first wife is dead.

However Tim still believes Geoff. Later, the cab driver tears up Elaine’s number and warns Sally not to make him choose between her and his dad.

Will Sally be able to convince Tim that Geoff is the liar?

Have you been wearing gloves out in public? Leave us a comment on our Facebook page @EntertainmentDailyFix and let us know what you think of this story.