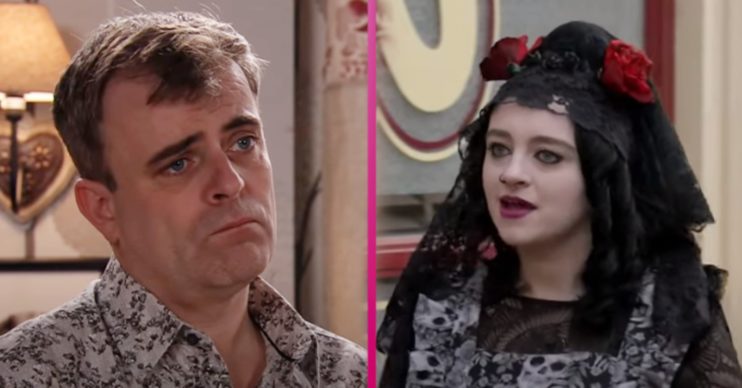 Coronation Street spoilers reveal Steve McDonald stages a protest at Roy’s. But is there something else going on with Steve?

Recently in the soap, Steve and Leanne’s son Oliver was diagnosed with incurable mitochondrial disease.

But whilst Steve seems to be holding it together, he starts to reach a breaking point.

It starts next week when Steve, who is already on edge about Oliver, calls into Roy’s for a sausage barm.

When Nina explains they’re having a veggie day, the cab driver storms out furious. He returns later brandishing a packet of sausages.

Meanwhile, Toyah meets up with social worker Karen. Karen promises to put the fostering wheels in motion once she’s received a reference from Leanne.

Later in the week, Leanne goes into the cafe to find Steve conducting a sausage protest behind the counter.

Realising the stress of Oliver’s illness is getting to him, Leanne gently ushers him out. She’s clearly worried about him.

Leanne takes Steve back to No.1 and cooks him some sausages.

They start to talk about Oliver and Leanne assures him that it’s fine to get upset over what’s happening with their son and he can always talk to her, as she knows what he is going through.

Steve takes comfort in her words. Will he start to open up about his feelings?

Coronation Street: What is happening with Leanne this week?

This week, Leanne runs into an old friend named Mandy who she use to attend antenatal classes with.

Mandy asks after Oliver, but Leanne lies saying he’s doing well. But as Mandy heads off, the worried mum is overwhelmed with grief.

Read More: Tisha Merry opens up about marriage and babies with Alan Halsall

She later confides in Toyah, telling her she lied about Oliver’s state and making out he was okay and feels ashamed. Toyah’s heart breaks for her sister.

Will she be able to help Leanne through this difficult time?