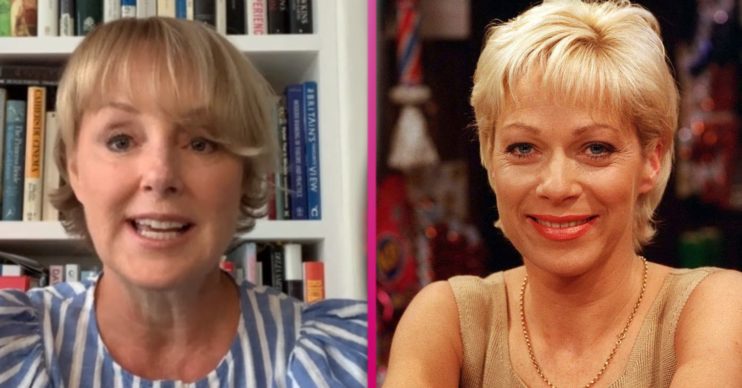 There was no love lost between the Corrie legend’s alter-ego Sally Metcalfe and Denise’s Natalie in the 90s, during which Sal once gave Natalie a huge slap across the face.

And Sally would love to see the Loose Women panellist back in Weatherfield so their characters could roll back the years to 1997 and go head-to-head again.

She said: “I think Denise’s character is the only one I’ve ever slapped that hard on the Street before.

“I had to spend about 15 minutes apologising. I felt so bad.

“It worked so well because we were such good friends.

“I really want your character, Natalie Barnes, to come back.

“She should get her revenge on Sally next time.”

Denise admitted her face was “really up” after Sally’s whack, and revealed her co-star was reluctant to slap her so hard while shooting the scene.

Speaking on ‘Loose Women’, Denise added: “She tried it six times and she kept going, ‘I just can’t, I just can’t.’

“And the director was getting so fed up, eventually he went, ‘Just go for it.’

“And that was it. My face was really up that day, you really went for it.”

Denise Welch on returning to Coronation Street as Natalie

Denise has previously admitted she would be prepared to go back to Corrie – should the right plot come along.

Speaking in July 2018, she exclusively told BANG Showbiz: “When you leave the job you leave it. I would never say never about going back but they’ve never asked me back and I’ve never asked to go back.

“Because I’ve been very fortunate and I’ve worked since I left, and I left through my own choice.

“But if there was a great storyline or something, of course. But I quite like my life as it is, and I’m doing this show [‘Calendar Girls’] for nine months, I’m doing ‘Loose Women’, I’ve got a novel coming out.

“It’s not like there is any room for anything in the foreseeable future.”