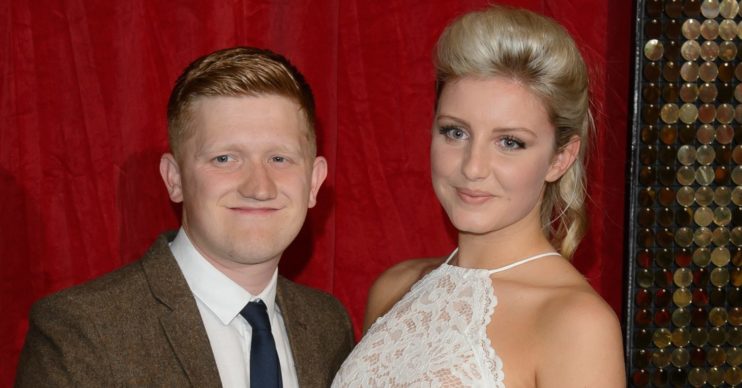 Sam Aston and wife Briony recently became parents for the first time after welcoming their son.

And Briony has wasted no time in introducing her baby boy Sonny to one of her favourite activities – yoga.

The new mum, who married Coronation Street star Sam last year, shared a video to Instagram showing herself doing yoga while Sonny laid down on a mat.

In the clip, Briony is seen kissing her little boy and rocking him before placing him on the mat.

She then did a series of yoga poses.

Briony said: “2 weeks postpartum and it’s someone’s first time on the mat ever.

Fans gushed over the sweet video, with one writing: “So cute! You look amazing.”

2 weeks postpartum and it’s someone’s first time on the mat ever.

This week, Sam and Briony announced the birth of their first child.

Coronation Street actor Sam and his wife both shared a photo of their new family of three.

In the picture, Briony is seen holding the newborn as Sam kissed him on the head.

Meanwhile, Sam wrote on his Instagram: “Welcome to the world little man. Our little ray of sunshine. Sonny James Aston.”

When did Sam Aston and Briony announce their pregnancy?

The couple announced in May they were to be parents for the first time.

Then, in June the 27-year-old soap star revealed they were expecting a baby boy.

He told OK! Magazine: “We’re having a boy! It was a massive surprise when we found out, as there are loads of girls in our families, so we were adamant we were having a girl.”

Briony added: “Sam couldn’t come with me because of the current rules, so I got the consultant to write the sex on a piece of paper and put it in an envelope and we both then sat in the car and opened it together.

“We were over the moon.”