The regulating body are deciding whether to investigate

The regulatory body has confirmed that 276 people contacted them following Friday night’s (May 1) harrowing episode in which Yasmeen fought back as Geoff threatened to kill her.

Ofcom also confirmed to Entertainment Daily they had had a further 28 complaints after Monday night’s episode (May 4), taking the total number to 304.

They are assessing the complaints and deciding whether to investigate.

The episodes were a harrowing watch as Geoff goaded and threatened Yasmeen with a knife.

What happened in the episode that Coronation Street viewers complained to Ofcom about?

Geoff had taken Yasmeen’s phone and locked her in the house. He later forced her to go to the pub, wearing a sexy red dress that didn’t fit her at all.

Things took a turn when Yasmeen found out Geoff had given Sally and Tim money for their wedding.

Angry Geoff said she was ruining the evening and he dragged her home. They left the Rovers regulars gossiping that Yasmeen wasn’t easy to live with.

Back at home, Geoff taunted Yasmeen and hurled insults at her, before approaching her with a knife and saying he should just kill her.

Viewers saw from Yasmeen’s point of view how frightened and confused she felt. Under threat, she picked up a bottle…

Whacking Geoff over the head, he was stunned that she’d fought back, but Yasmeen wasn’t finished.

Clutching the broken bottle she sliced it into his neck and he fell to the floor.

On Monday night (May 4) Yasmeen called the police and told them she had “killed her husband”.

Paramedics arrived and began treating Geoff, as his son Tim demanded answers about what happened.

Geoff was rushed to hospital and Yasmeen was taken to the police station, where fans of the show were unhappy with the treatment she received. 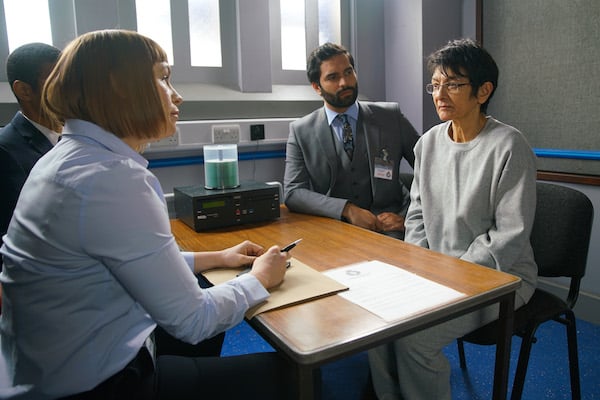 Later in the week, Yasmeen is charged. With Geoff still alive, it doesn’t look like it’ll be a murder charge, but she’s still in a lot of trouble.

Imran is representing her and her granddaughter Alya will return from Spain desperate to save her gran. She heads to the hospital wanting answers from Geoff.

Sair Khan, who plays Alya, explained to Digital Spy: “Ryan tells her that Geoff is unconscious and Yasmeen might’ve killed him.”

The actress also revealed Alya “wants Sally and Tim to know about Geoff’s various lies and deceits and how he’s rinsed her family business.

The future seems like it’s looking bleak for Yasmeen. Can anyone help her?

Coronation Street is next on Wednesday at 7.30pm on ITV.