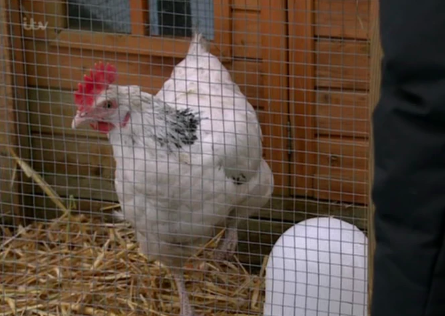 Coronation Street has reassured fans that the chicken who played Charlotte Bronte was not murdered by Geoff Metcalfe. Yes, really!

Fans were left disgusted on Friday night as Geoff killed Yasmeen’s favourite chicken as part of his campaign of abusive coercive control.

But the soap has been keen to point out that the real chicken that played Charlotte didn’t suffer the same fate.

Speaking after the horrific scenes were aired, actress Shelley King, who plays Yasmeen, confirmed the chicken had been spared.

Shelley said: “The chickens became a very important part of Yasmeen’s transference of affection, of love, she started off not liking them but when Sherif abandoned them she felt part of them.

“She embraced them, she loved them, and she fed them, and they became part of her family. And not only did she feel that loss but she ate it and I think that’s a hugely traumatic experience to go through. It was truly despicable.

“But they’re not dead so I have to console myself with that – we’re all actors.”

On screen, Geoff was angry when Yasmeen hadn’t started preparing his dinner, as she had been cleaning out the chicken coop.

Yasmeen later put her husband’s meal on the table for him, but he was furious to see there was no meat and threw it in the bin.

She told Geoff the reason there was no meat was because he hadn’t given her enough money to buy any and she needed to stick to his budget.

A furious Geoff told Yasmeen he’d sort out dinner and sent her upstairs and by the time she was awake he had already killed, plucked and roasted Charlotte before serving her to Yasmeen.

As Yasmeen tucked in Geoff then sickeningly dropped the news on her, saying: “I thought she might be a bit dry, being an older bird. Well, at least she’s fed us one last time. I’d like to raise a toast. To Charlotte!”

Realising Geoff had killed her beloved chicken, Yasmeen began vomiting the food up and sobbing – fleeing vile Geoff, and viewers were disgusted at what he had done.

One tweeted: “Will not be watching @itvcorrie tonight and probably never again. Yes, this is a very important subject but to kill animals!!! Why #Corrie ????? No need at all.”