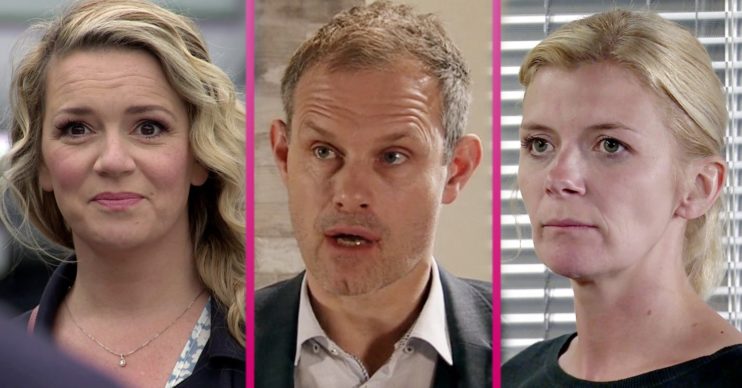 Coronation Street: Nick and Natasha will get back together, fans predict

Natasha and Nick dated in 2010

Coronation Street fans are predicting Nick and Natasha will get back together as Leanne has begun to push Nick away.

Last year Nick was stunned when he ran into his ex-girlfriend Natasha and discovered he had a 10-year-old son called Sam.

With Natasha back and able to look after Sam, Nick asked Leanne if he could move back in to their flat in Victoria Court. But due to her having to deliver drugs for Harvey, Leanne was against the idea.

Natasha then offered for Nick to stay at hers in order to save him money from renting somewhere short term.

But fans are starting to predict that Nick and Natasha will end up getting back together.

#corrie #coronationstreet how long before Nick and Natasha are having a fling.

I actually hope something happens between Nick & Natasha. Leanne doesn't give a toss about him and has never treated him well in the first place #Corrie #CoronationStreet

Coronation Street: Do Nick and Natasha get back together?

In tonight’s episode of Corrie (Monday, March 22), Leanne is upset when she discovers Nick is staying with Natasha. She is later upset when she sees them with Sam walking down the street together.

Later this week, Harvey drops off more drugs for Leanne and orders her to put on her nurses uniform and get out there.

Soon Toyah spots Leanne leaving Victoria Court with Harvey and assumes she’s having an affair behind Nick’s back.

Having made the drop, Leanne heads off in her nurses uniform. But when a woman approaches and asks her to help a man who’s collapsed at the tram station, Leanne’s horrified.

Soon Harvey is calling round with another job for Leanne. But when she refuses an argument kicks off.

Later, Toyah tells Nick she saw Leanne with another man and Nick goes to pay his girlfriend a visit.

As Nick comes up to the flat, Leanne is forced to hide Harvey in Oliver’s bedroom. But when Nick spots Harvey’s jacket, his suspicions are confirmed.

Later, Natasha admits to Nick that she still has feelings for him. With Leanne pushing him away, will he fall back into his ex’s arms?