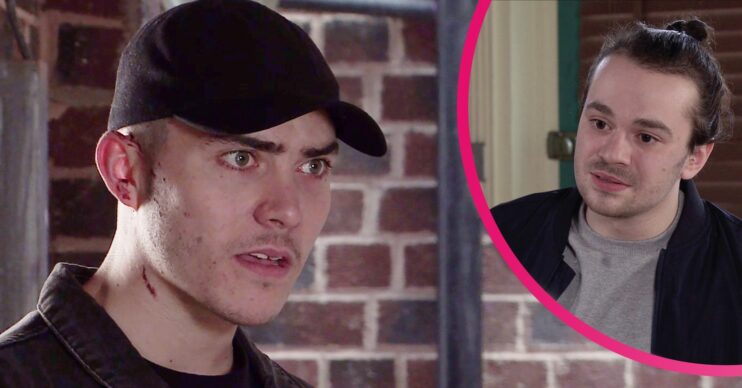 Coronation Street: Justice for Seb AT LAST as Corey is charged with murder

Back in May, Corey and his friends attacked Seb and his girlfriend Nina Lucas.

Kelly slapped Nina, however when Corey and his friends began beating up Seb and Nina, she begged Corey to stop.

Shortly after the attack Seb died from his injuries. Corey threw his bag and clothes from the attack in the river.

In court, Kelly was found guilty for Seb’s murder but Corey was found not guilty.

Recently Asha discovered a homeless man named Stu had Corey’s bag that he threw in the river. Stu sold the backpack back to Corey but gave the clothes to Nina and Asha who handed them into the police.

Earlier this week the police revealed the clothes were enough to arrest Corey.

In tonight’s episode, Corey and his dad planned to flee he country with the help of Eli’s dad, Christian.

Gary managed to find Christian and when Christian went to pick Corey and Stefan up he told them to get in the back.

After they got in, Gary took control of the van and drove them to Weatherfield police station where Corey was arrested.

DS Swain told Corey that his clothing from the night of the attack had been found. On the clothes Corey’s DNA was found as well as Seb’s blood, which was consistent with that of an assault.

They also had shoe prints and forensic evidence from Seb that proved Corey kicked him to death.

DS Swain told Abi, Nina, Asha and Kevin that Corey is being charged with murder.

They were all thrilled and later Nina and Abi set off a firework in Seb’s memorial garden.

What do you think of Maria’s storyline? Leave us a comment on our Facebook page @EntertainmentDailyFix and let us know what you think.