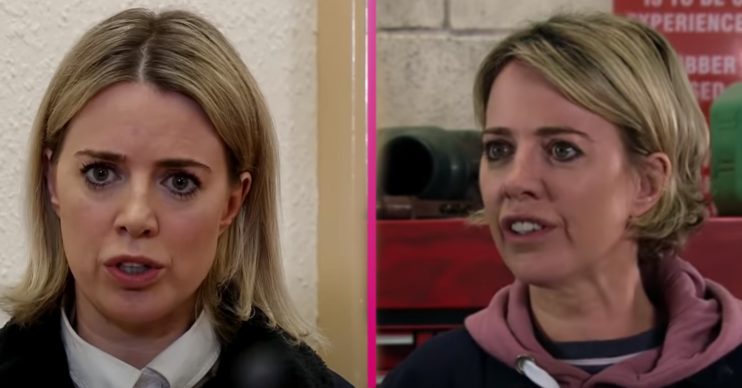 Coronation Street: Is Abi going to be destroyed by fresh addiction?

Abi has had problems with addiction in the past

Coronation Street showed Abi getting into an accident in Wednesday’s episode (August 19). But is her life about to be destroyed by addiction?

At work, Abi found herself in a scary situation when a car engine fell on her, trapping her arm.

However she was panicking as she was going to miss her chance to say goodbye to her twins, who are moving to Australia with their adoptive family.

In tonight’s episode (Friday, August 21) Abi was taken to hospital. Kevin learnt of Abi’s accident and told her son Seb the reason for her missing saying farewell to her kids.

At the hospital, Abi wanted to go home. But the nurse advised they could manage her pain better if she stayed in.

Seb gave Abi a farewell card that Charlie and Lexi had made for her and she broke down in tears.

As she sobbed in her bed, she told the nurse she needed something to take the pain away. The mechanic quickly noticed a cart of medicine by her bed and took a vial of morphine.

But Peter Barlow spotted her stealing the pain relief and warned her to put it back. However before she got the chance to, Kevin arrived.

Coronation Street: Is Abi about to be destroyed by addiction?

Next week, Kevin leaves for work and leaves Abi relaxing on the sofa. But she knocks bag a slug just as Peter arrives.

She stuffs it down the sofa and insists that she didn’t steal any medication from the hospital.

Peter is seemingly satisfied but former addict Abi is furious when she realises the morphine is gone.

Abi heads to the Rovers and confronts Peter in the backyard. What will he say?

Later Peter calls in at No.11 and tells Abi she needs to get help. But Carla is suspicious when Peter lies about going to meet Abi.

When she finds out he’s helping her with her addiction, Carla warns him to be careful as it wasn’t long ago Abi had feelings for him.

Meanwhile, Kevin’s sister Debbie returns to the cobbles. She warns Abi not to mess her brother about and Abi assures her she wouldn’t dream of it.

Later Abi calls Peter and assures him she will attend the meeting later.

As Kevin and Debbie come in, she quickly hangs up the phone. But Debbie offers to cook lunch suggesting she and Abi should get to know each other better and the mechanic has little choice but to accept.

However Abi disappears as soon as she’s eaten leaving Debbie suspicious. Will Abi tell Kevin and Debbie the truth?

Do you think Sarah’s made a big mistake? Leave us a comment on our Facebook page @EntertainmentDailyFix and let us know what you think of this story