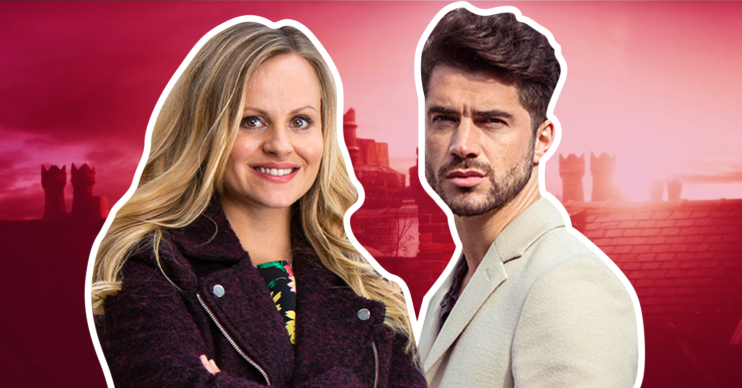 Sarah and Adam only got married earlier this year

Coronation Street fans have no sympathy for Sarah Barlow after her husband Adam ended their marriage.

A couple of weeks ago, Sarah discovered her ex-boyfriend Gary killed loan shark Rick Neelan. Although she planned to go straight to the police, Gary ended up saving Sarah from being hit by a car.

Gary confessed to Sarah that he still loved her and with him saving her life, she decided to keep his secret and threw away Rick’s watch, which was found in the woods where Gary buried the body.

However Sarah’s husband Adam became increasingly suspicious and when he found out the truth, he gave Sarah an ultimatum.

While Gary was getting married to Maria, Adam told Sarah she needed to choose between him and defending Gary.

Sarah told her husband that she would get in trouble for disposing of evidence. Furious, Adam told Sarah he wouldn’t be second best to Gary and ended their marriage.

Although Sarah has been left heartbroken by Adam’s decision, viewers have no sympathy for her.

I’m tooo happy Adam is doing this to Sarah. Sorry she deserves it #Corrie

Adam isn’t messing about. Sarah is an idiot #Corrie

Sarah thought Adam wanted to talk and get back with her. No chance love. You have made your own bed lie in it #Corrie

Keep hanging your head in shame or SORT your LIFE out..!!

Clever girl Sarah, hope Gary was worth it #corrie

What Adam doesn’t know is that Gary knows Sarah was also involved in a murder.

Back in 2015, Sarah was attacked by Callum Logan as she tried to record him confessing to his crimes. However when he turned violent, David’s wife, Kylie, hit him over the head with a wrench, killing him.

David, Kylie and Sarah buried the body in the annex of the Platts’ house. But when Tyrone Dobbs crashed his truck through the annex the body was discovered.

Meanwhile, the blame for Callum’s death was placed on builder Tony Stewart, as it was his wrench that was used to kill Callum.

However, Tony died of a heart attack before Callum’s body was found in the annex, therefore making it impossible for him to defend himself.

After getting into a relationship with Gary, Sarah told him the truth about Callum’s death. But will she ever tell Adam why she’s keeping Gary’s secret?

Do you think Sarah’s made a big mistake? Leave us a comment on our Facebook page @EntertainmentDailyFix and let us know what you think of this story.