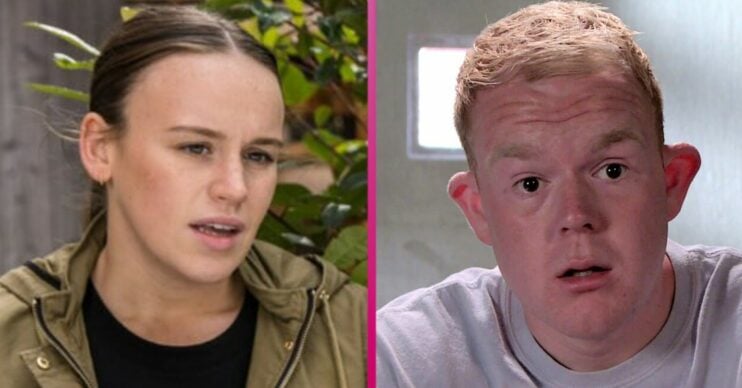 Coronation Street: Heartbreak for Faye and Craig as she struggles to move on?

Has her experience with Ray pushed her too far?

Coronation Street has hinted at heartbreak for Faye Windass and Craig Tinker as she struggles to adjust to life outside prison.

The teenager has been let out on bail and Craig is desperate to welcome her home.

He even decorated the house with yellow ribbons, but Faye was upset with his efforts and pointed out she was only on bail and not actually a free woman.

Why was Faye in prison?

Last year, Faye worked at the Bistro and her boss Ray Crosby made advances towards her.

He told her that if she wanted to move up at the Bistro, she would have to sleep with him.

In December when they were alone in the Bistro, Ray forced himself on her and when Faye told him to stop he wouldn’t.

He only stopped when Faye’s brother Gary walked in.

Later, Adam Barlow was drinking alone at the bar and was attacked by an unseen person.

It was revealed that Faye attacked Adam, thinking he was Ray.

Faye told Gary and he tried to get rid of the trophy Faye used to hit Adam, as the police were looking for it.

But when Gary was caught with the weapon and arrested, Faye came clean and told the police she hit Adam thinking he was Ray.

Adam didn’t want charges pressed when he found out what happened to Faye.

Ray was later arrested for trying to kill Debbie and Kevin by locking them in a freezer.

However as Ray’s trial hadn’t begun, his sexual assault on Faye couldn’t be used as a mitigating factor.

Faye went to court and was sentenced to three years in prison.

Are Craig and Faye together in Coronation Street?

Craig has always had a thing for Faye and they were making a go of things before she went down.

But copper Craig can’t really be in a relationship with someone perceived to be a criminal.

When Faye was facing prison, Craig decided to quit the force as he felt being with her was more important. But when Faye found out, she dumped him, determined not to let him give up his dream career for her.

Following her release, it’s clear Craig wants to get back together, but with Faye struggling, is he set for heartbreak?

What happens next with Craig and Faye?

Faye apologises to Craig for overreacting and the pair head out together, looking likely to rekindle their romance.

Tim and Gary are convinced Faye really cares about Craig, but needs time to adjust to being out.

However, when Faye starts work back to the Bistro on Wednesday November 24, the cracks begin to show.

She’s so nervous she drops a tray of food and when it all becomes too much she tells Debbie she can’t work there. Revealing it brings back such bad memories of what happened with Ray, Faye rushes out.

Faye confides in Tim and he suggests she work at the factory, taking over Alina’s sales job. Sarah agrees to a month’s trial and the family, and Craig, take her to Speed Daal to celebrate.

But as Faye pointed out herself, she’s only on bail. Could she be sent back down? And what would this mean for her future with Craig?

Can they really make a go of things? Or will it all end in tears and heartbreak once again?