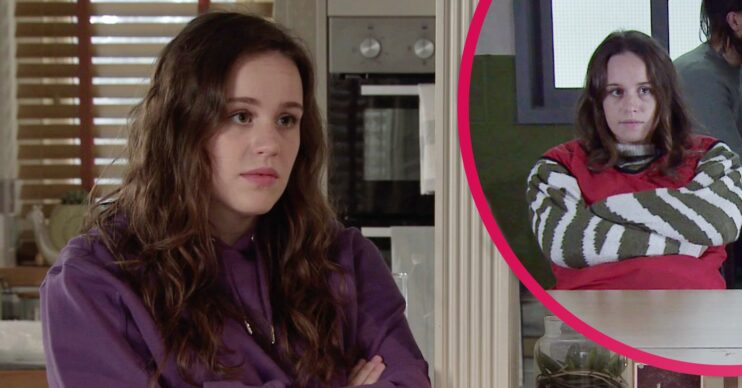 Coronation Street: Why is Faye Windass in prison and who plays her?

But what do we know about Faye and why is she in prison?

Who is Faye Windass in Coronation Street?

Faye Windass is the biological daughter of Tim Metcalfe and Jenny Butler.

Faye first appeared in 2011 when Anna Windass and her then-husband Eddie Windass were looking to adopt.

Anna and Eddie split up but eventually Anna fostered Faye and then adopted her.

This makes her the younger adoptive sister of Gary Windass.

Eventually Faye got back in contact with her biological dad, Tim.

Now Tim is married to Sally Metcalfe, making Faye the stepsister of Rosie and Sophie Webster.

Anna no longer lives in Weatherfield and before Faye was sent to prison, she was living with Sally and Tim.

What happened to Faye’s daughter in Coronation Street?

Faye became a mother shortly after her 13th birthday.

When she was 12 years old, Faye fell pregnant after sleeping with classmate Jackson Hodge.

Faye was being bullied by girls at school who were calling her fat.

Her friend Craig Tinker suggested she may be pregnant and after taking a test, she found out she was in fact expecting.

However Faye struggled with motherhood and eventually Jackson’s family offered to take Miley to live with them.

Jackson’s family moved to Canada with baby Miley, but in 2017 they visited Weatherfield and Faye reunited with her daughter.

She did begin to bond with her, however when her then-boyfriend Seb punched Jackson, warning him to keep away from Faye, Jackson’s family stopped Faye from seeing Miley.

Why is Faye in prison?

Last year, Faye worked at the Bistro and her boss Ray Crosby made advances towards her.

He told her that if she wanted to move up at the Bistro, she would have to sleep with him.

In December when they were alone in the Bistro, Ray forced himself on her and when Faye told him to stop he wouldn’t.

He only stopped when Faye’s brother Gary walked in.

Later, Adam Barlow was drinking alone at the bar and was attacked by an unseen person.

Read more: Has Gemma Oaten left Coronation Street already? Will Isla be back?

It was revealed that Faye attacked Adam, thinking he was Ray.

Faye told Gary and he tried to get rid of the trophy Faye used to hit Adam, as the police were looking for it.

But when Gary was caught with the weapon and arrested, Faye came clean and told the police she hit Adam thinking he was Ray.

Adam didn’t want charges pressed when he found out what happened to Faye.

Ray was later arrested for trying to kill Debbie and Kevin  by locking them in a freezer.

However as Ray’s trial hadn’t begun, his sexual assault on Faye couldn’t be used as a mitigating factor.

Faye went to court and was sentenced to three years in prison, which is where she is currently.

Read more: Who is Sally Metcalfe in Coronation Street? When did she go to prison?

Ellie Leach and her co-star Brooke Vincent, who plays Sophie Webster, are cousins in real life.

However on Corrie, Faye and Sophie are step-sisters.

Ellie and Brooke appear to have a close relationship and Ellie is even Godmother to Brooke’s oldest son Mexx.

Does Ellie Leach have a boyfriend?

Ellie has a boyfriend named Reagan. The couple have been together since 2018.