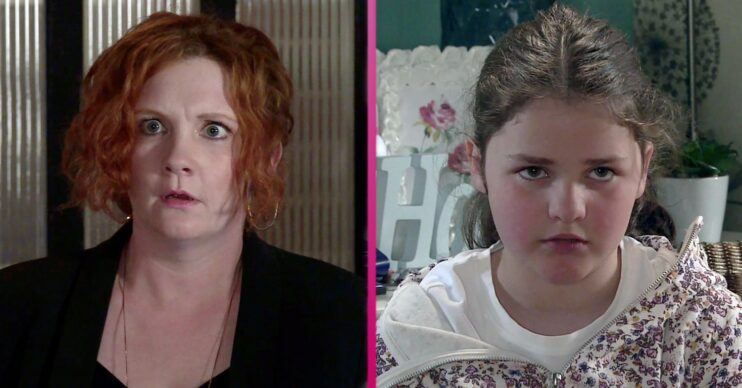 Coronation Street: Have Fiz and Hope left Weatherfield for good?

Coronation Street viewers saw Fiz make the decision to leave Weatherfield with her daughter Hope, but have they gone for good?

Earlier this week, Hope used Alina’s keys to get into the salon flat to get her toy dinosaur back.

However when she was in the flat, she moved a candle to set fire to the flat, unaware Alina was asleep.

Luckily Sally and Eileen noticed that flat was on fire and alerted the emergency services.

Pregnant Alina was rushed to hospital and it was later revealed she was having a miscarriage.

Fiz admitted that Hope started the fire. While Tyrone was adamant they report Hope and she get the help she needs, Fiz begged him not to fearing she would be taken away.

Later Craig and Alina went to Fiz’s house to question her about the fire, however she had gone.

Later Fiz and Hope could be seen going to the tram station, but are they leaving for good?

Coronation Street: Have Fiz and Hope left Weatherfield for good?

No, Fiz and Hope will return to Weatherfield next week, however it looks like Fiz will be the one who end up in trouble.

In next week’s scenes Tyrone tells Evelyn that Fiz and Hope have gone to stay with Cilla. However Fiz tells Tyrone that they’re at a B&B in Manchester but she has no real plan.

Having got the keys back off Hope, Tyrone returns them to Alina and makes out he found them in a jacket pocket.

Alina tells Tyrone that even though Fiz is off the hook, it just means that someone else started the fire with the intention of killing them.

Alina tells Craig about the people trafficking case she was involved in and wonders if one of the people from the gang set fire to the flat out of revenge.

Later Tyrone and Alina decide to move into No.9 as Alina is living in constant fear.

Evelyn warns Tyrone that they could be putting all of their lives in danger.

Later Alina confronts Rachel and blames her for starting the fire, however Rachel insists she had nothing to do with it.

Alina wonders who could be responsible for the blaze, but Evelyn has her own suspicions.

As Evelyn and Alina quiz Tyrone about Fiz, Tyrone starts to regret going along with the plan.

When Evelyn reveals she’s called Cilla and knows Fiz isn’t with her, Tyrone crumbles and tells his nan everything

Fiz and Hope return and Alina makes a decision

Later Alina learns from Chesney that Cilla is on holiday and is confused by Tyrone’s story.

As a tearful Fiz is helped into the police car, Alina approaches Tyrone and reveals that she called the police. She tells him she discovered that Fiz was lying about her whereabouts.

Meanwhile Evelyn quizzes Hope about the fire and she’s deeply troubled by her lack of remorse.

Later Tyrone tells Alina the truth – it was Hope who started the fire.