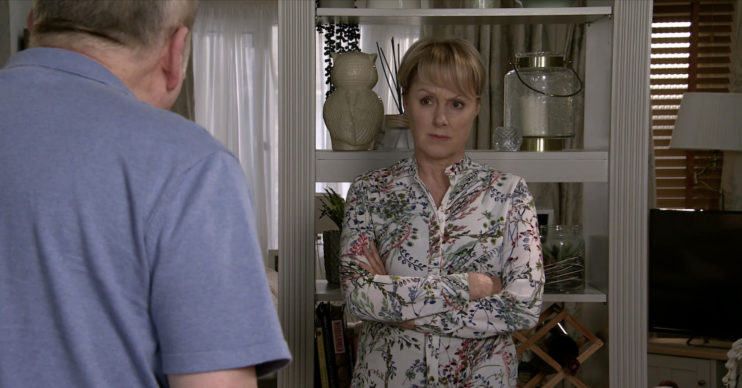 Coronation Street: Geoff to KILL Sally as she works out the truth?

Coronation Street viewers have been literally screaming at the screen for Sally Metcalfe to see through father-in-law Geoff.

We’ve watched as she has slowly begun to notice that his version of events about what happened the night he was attacked by Yasmeen doesn’t add up.

And that the picture he has been painting of the woman she counted as a friend as well as a neighbour isn’t making sense.

During this week’s visit to Weatherfield, it’s clear she’s properly on to his lies – thank GOD!

Sally tells husband Tim: “He keeps playing the victim… and I’m not sure that he is.”

She then makes it clear that she wants his dad out of their house.

Meanwhile, Geoff is furious when he discovers that Yasmeen is now going to plead not guilty.

He tells Tim they need to show a united front, but Sally is refusing to play ball.

Brass-necked Geoff  chillingly challenges her. “You’re forcing him to choose between his wife and his dad,” he taunts. “What happens if he chooses his dad?”

Read more: Geoff’s own stupidity to be his downfall?

Sally Dynevor, who plays Sally, says her character has been growing suspicious of Geoff for a while.

She revealed recently: “The first inkling of it was when Alya came into Geoff’s hospital room and screamed about the domestic abuse and what he’s done to Yasmeen over the weeks.

“It kind of rings a tiny bell in Sally, because there is just no way that Yasmeen is like that.

“And Sally knows it. There is no way she would just try to kill him.

And she says this week it comes to a head: “Then there’s one scene where Geoff gets angry with Sally and she sees this spark in him, and that’s it, she wants him out of the house.”

It seems Sally is determined to do the right thing by Yasmeen – even if that means sacrificing her marriage.

Sally told Metro: “I think she would be prepared to risk it as, how could she live with someone who is not accepting of some of the issues that have been raised about Geoff?

Read more: Carla forced to fight for Peter as mystery woman shows up?

Geoff out of control

So without Sally wanting to save her relationship with Tim as his bargaining chip, Geoff is losing control. And we all know how Geoff reacts when he can’t control someone…

Yasmeen’s attack came as he pondered out loud whether he ought to kill her – does he actually have it in him to murder someone… and is Sally in peril?

Here's an EXCLUSIVE first look at our brand new trailer!

Coming this June on Coronation Street… Will Yasmeen break her silence?