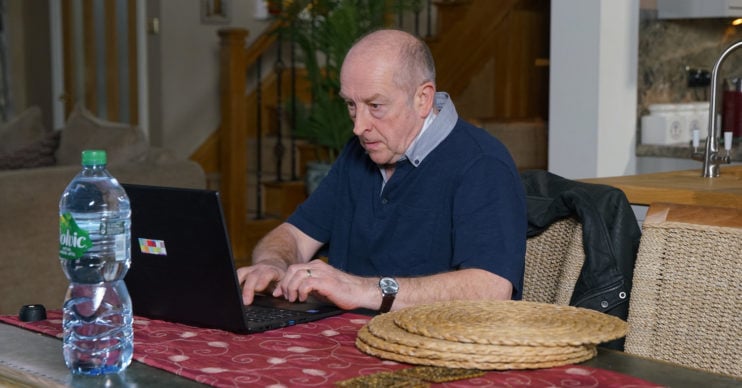 Geoff may have made a huge mistake!

Coronation Street viewers think Geoff’s hidden camera footage could lead to his downfall, despite it being deleted.

During Geoff’s campaign of abuse against his wife Yasmeen, he set up a hidden camera in her home in order to spy on her.

However, after he threatened to kill Yasmeen, she stabbed him in the neck. Knowing the footage would prove it was self-defence, he appeared to delete it.

In this week’s episodes, the radio DJ managed to get back into No.6 and retrieve the camera, which was hidden in a CD rack.

As he went onto his laptop, he looked at the footage from the night of the incident and deleted it from his laptop.

However, viewers think the footage can be easily retrieved and Geoff’s own stupidity will lead to his downfall.

In a Digital Spy forum, one fan wrote: “Geoff was frantically covering his tracks last night, disposing of the camera and apparently deleting the incriminating video clip, in which he could be seen taunting Yasmeen to the point that she lost it.

“I say ‘apparently deleting’ because it occurred to me later that not everything one deletes is gone forever. He did it all in a rush so I’m hoping that his recycle bin might still contain the incriminating file. If Alya and Ryan get a chance to go through the laptop, they’ll surely find it.”

A second said: “Even if the recycle bin is emptied, the file is actually still retrievable. But it would require somebody knowing that there is something to look for in the first place.”

A third added: “Someone might borrow his laptop and have to go into the recycle bin to find something they accidentally delete and end up finding the deleted videos.

“If they do this, I think they should use Faye as it could give her something interesting to do.”

After erasing the footage, Tim walked in and saw Geoff’s camera. When he began to question it, Geoff told his son that it ‘helped him sleep better at night’ and he was checking to see if it had caught anything.

Read More: Coronation Street SPOILERS: Is THIS what finally convinces Tim that Geoff is a lying monster?

But he lied further saying the last thing the camera recorded was two weeks before. As Geoff grew ‘upset’ for not telling the police about the camera, Tim agreed not to tell anyone about it.

Later in the episode, Geoff dumped the camera in the bin. But could the evidence still be on Geoff’s computer?