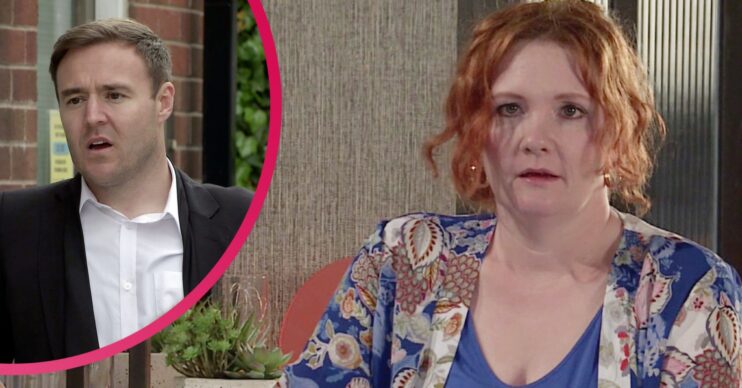 Coronation Street fans have turned against Fiz after Tyrone and Alina revealed their baby news.

Earlier this year Tyrone left his fiancée Fiz as he had feelings for Alina Pop. Tyrone very quickly moved in with Alina into the salon flat and the new couple prepared to buy the property together.

However last week, Alina was shocked to discover she’s pregnant with Tyrone’s child.

She told Tyrone the news and he was also shocked and didn’t know how to react.

Later the two had a discussion and decided they wanted to have the baby. Meanwhile Fiz was helping Tyrone organise the funeral for his ex-girlfriend Kirsty, who suddenly died.

After supporting him at the funeral, Fiz saw Alina and Tyrone go to the medical centre. Tyrone admitted to her that Alina was pregnant.

Fiz didn’t take the news well, however when she discovered Tyrone’s nan, Evelyn, knew about the pregnancy, having figured it out earlier, she kicked Evelyn out.

Later Evelyn returned to the house, saying she would leave if given time, but Fiz had a change of heart and allowed her to stay.

Evelyn then offered to babysit the kids while Fiz went out with Maria.

However fans have turned against Fiz saying she ‘constantly belittled’ Tyrone and weren’t impressed with her for trying to kick Evelyn out.

Nah sorry I don’t feel sorry for Fiz, she consistently put Tyrone down and belittled him #Corrie

This horrible mocking attitude Fiz has is the reason why Tyrone left her. #Corrie

Why is Fiz lashing out at everyone who tries to help her? It isn't Evelyn's place to tell her Alina is pregnant. Also why is she so bothered about people's opinion. #Corrie

Evelyn should’ve put Fiz in her place. She really doesn’t have any right to kick her out. The audacity. #Corrie

Coronation Street: What’s next for Fiz and Tyrone?

In this week’s scenes Fiz tells Tyrone that he needs to tell the girls about the baby today. She says if he doesn’t, then she will.

Later Tyrone and Alina break the news to Hope and Ruby that they’re going to have a little sibling. How will they take the news?

Coronation Street continues tonight at 7.30pm and 8.30pm on ITV. The episode will be on for an hour.

If you want to watch this week’s episode early, or catch up on previous episodes, they’re available on ITV Hub.

Will you be watching this week’s Coronation Street? Leave us a comment on our Facebook page @EntertainmentDailyFix and let us know what you think of these Corrie spoilers