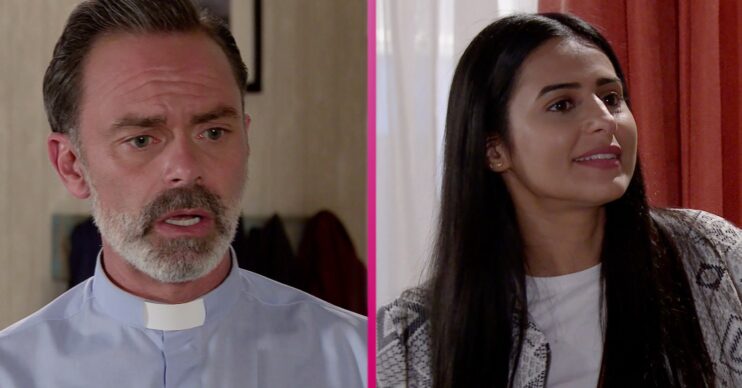 Meanwhile Carla wants Izzy back to work at the factory and Tyrone tells the girls the baby news.

Paul finds Summer brooding in Victoria Garden. When Todd explains that Summer is avoiding her diabetes appointment, Paul offers to go with her.

Later Summer thanks Paul for going with her to the appointment and confides in Billy how much she misses having him around.

Meanwhile Todd is determined to prove to Summer that she can trust him. He returns home and proposes to Billy.

Later in the Rovers, Paul warns Billy that if he married Todd, he’ll live to regret it.

An ecstatic Billy and Todd announce that they’re engaged.

Later Summer hands Todd a latter that she found on the porch. When Todd opens it, it says “Don’t get too comfortable. Your lies will come out.”

Carla wants Izzy back at the factory

When Sarah facetimes Izzy to chase up some samples they need, she sees a man in the background before Izzy kills the call.

Carla meets with Jo Lafoe and presents her with Izzy’s samples, but it’s soon clear they’re not up to standard and an embarrassed Carla assures her there’s been a mix up.

Later Carla calls Izzy and confronts her over her shoddy work. Carla tells Sarah that it’s time she was told to return to the factory.

Sarah calls Izzy and tentatively suggests it might be good for her to return to work. Carla tells Sarah that the situation with Izzy is untenable and if she refuses to come back to work, they’ll have to get rid of her.

Fiz tells Tyrone that he needs to tell the girls about the baby today. She says if he doesn’t, then she will.

Later Tyrone and Alina break the news to Hope and Ruby that they’re going to have a little sibling. How will they take the news?

Daisy has a plan for Ryan

Alya tells Ryan that Debbie is looking for a trainee manager at the Bistro.

Ryan agrees to apply for the job, however Daisy tells him that she knows a way for him to make money from his DJ-ing, rather than a job a the Bistro.

Daisy and Ryan put a business proposal to Jenny. They suggest setting up a mobile pub with a DJ that the punters can hire and set up in their own gardens.

However Alya can’t help but wonder if Daisy is after her boyfriend.

Gail has some news for Sam

Natasha and Sam call at No.8 with a get well card for Gail. When Gail reveals that she’s off to Thailand tomorrow and doesn’t know when she’ll be back, an upset Sam rushes out.

Coronation Street continues tonight at 7.30pm and 8.30pm on ITV. The episode will be on for an hour.

If you want to watch this week’s episode early, or catch up on previous episodes, they’re available on ITV Hub.