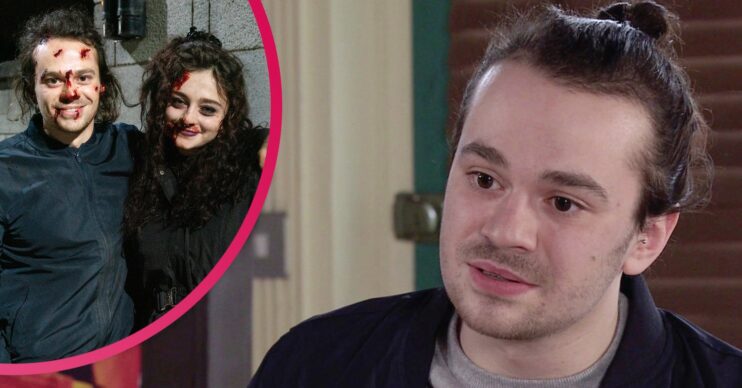 Coronation Street has revealed that Harry Visinoni will be returning as Seb in upcoming scenes which reveal what happened the night of Seb and Nina’s attack.

Earlier this year, Seb and Nina were attacked by Corey Brent, Kelly Neelan and their friends.

Nina was badly injured and left needing surgery, however Seb died from his injuries.

Actor Harry returns to our screens next week when Nina starts to remember exactly what happened on the night she and Seb were attacked.

Read more: Who plays Imran’s ex-wife Sabeen in Coronation Street? What else has she been in?

Monday night’s double bill of Corrie (August 30) features cleverly shot flashback scenes. This takes Nina and the viewers back to that night in May when Seb was murdered.

For the first time, the audience will find out who was responsible for the cowardly senseless crime.

Harry has talked about returning to the cobbles after Seb’s death to film the flashback scenes.  He also revealed how he was able to work closely with his co-stars.

The actors formed a close cohort bubble so they could film the fight scenes and even a kiss between Nina and Seb.

When asked if the flashback scenes were filmed before he left, Harry said: “No, I came back specially to film the scenes a couple of months after my final day on set.

“I had to make sure I didn’t look too different. I had wanted to have a really different haircut when I left but I had to keep Seb’s hair long.

He added: “I was back for over a week to film the scenes. I always knew that I would be coming back to film but I didn’t know exactly what the flashback scenes were going to show. There was a lot more detail in the scenes and more filming than I expected. But I’m really pleased with what we have done.”

When asked what it was like recreating the relationship between Nina and Seb, Harry said: “It was easy to get back into that and helped by the fact that we could actually work more closely.

“The whole relationship had been filmed in the past two metres apart and suddenly we were able to be really close to each other.

I was back for over a week to film the scenes.

“There is a moment in the reconstruction where we actually got to kiss and that really helps tell the story of that night and remind people of the beauty of their relationship and ensure the viewers are invested in the outcome of the trial.”

Coronation Street usually airs on Mondays and Wednesdays 7.30pm and 8.30p. There’s also an hour long episode at 7.30 on Fridays on ITV.