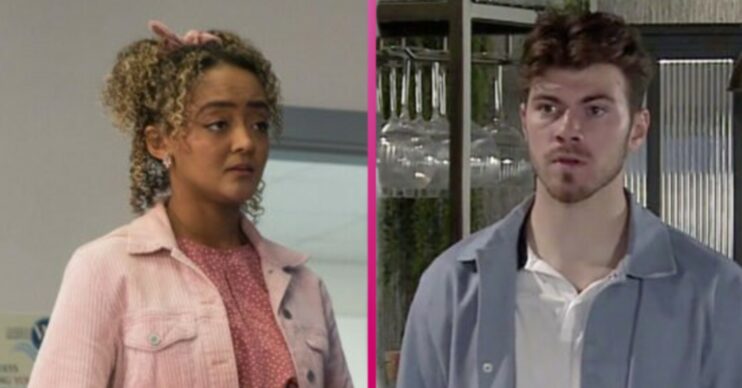 Coronation Street SPOILERS: Emma drops a bombshell on Curtis after he collapses

Their future is up in the air

It’s a horrible moment when Curtis is taken ill at the Bistro and Emma can only pray he’s going to be ok as medics get to work.

Following the drama, Emma has to face the reality of their tragic situation and that she could lose Curtis at any moment.

What does that mean for the future of their relationship?

They had a rocky start, but they’ve been inseparable since Curtis came clean to Emma about his health.

Emma has gone into their romance knowing that Curtis is living with a heart problem that could suddenly claim his life.

In next week’s Coronation Street spoilers, Curtis is stressed as he prepares to get critical test results from the hospital.

Emma offers to with him as moral support, but fate delivers a cruel blow.

Curtis is taken ill while working in the Bistro after he collapses mid-shift and is rushed to the hospital by ambulance.

Emma is beside herself as she waits to hear what’s happening. Curtis’ doctor suggests they keep him in overnight to run more tests.

For Curtis, it’s pointless as he resigns himself to his fate and asks Emma if they can go home.

Read more: Who plays Curtis in Coronation Street? What else has Sam Retford been in?

But when they arrive back at the flat, Emma steels herself to deliver bombshell news that could change everything.

Will they be moving forward together or going their separate ways?