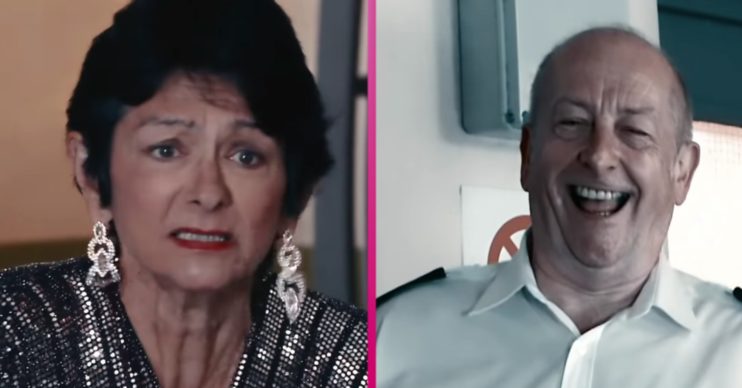 She just can't escape him

Coronation Street fans have been left terrified after Yasmeen had vision of abusive Geoff Metcalfe in prison.

Abuse victim Yasmeen is locked up in prison after stabbing Geoff in the neck with a wine bottle.

He had threatened to kill her with a knife and she was forced to defend herself – but she ended up being locked up, awaiting trial for attempted murder.

As her trial day approached Yasmeen was struggling.

Earlier this week she finally found the strength to tell Geoff that she would never go back to him.

She had broken free of his control – but suffered horrifying nightmares as a result.

Friday night’s episode began with Yasmeen suffering an evil vision where she was surrounded by four Geoffs in prison.

He tried to force her back inside the magic box he tortured her with.

The cruel nightmare left her shaken and panicked over what was to come – and later she suffered a heart attack.

The strain was too much.

But the nightmare was too much for viewers too and they couldn’t cope with them.

One said: “The start of the episode where Yasmeen had that nightmare about Geoff scared me wtf #corrie.”

A second said: “#Corrie who needs Freddy king of nightmares when you can dream up grotesque Geoff the ultimate Corrie nightmare,” shivered another.

A third said: “Bloody hell, Freddy Krueger visiting you in a nightmare is bad enough but Jiggle It Geoff is on another level!!”

Next week Yasmeen pulls through and has to stay in hospital to recover.

However due to her heart attack, Yasmeen’s trial can’t go ahead and is postponed for a while until she’s fit enough to go to court.

Meanwhile, Geoff’s ex Elaine is saddened to hear about it – but vows to still help her.

Later, Elaine calls Alya and tells her she is prepared to give evidence against Geoff and do everything she can to help Yasmeen. Alya is overcome with gratitude.

However, things hit a snag when Tim fails to believe Elaine about his dad – and she’s crestfallen.

Later, Elaine and Alya meet up in Speed Daal. Alya implores her not to leave as she’s their only hope of securing Yasmeen’s freedom. Elaine is torn. Will she try to help Yasmeen?