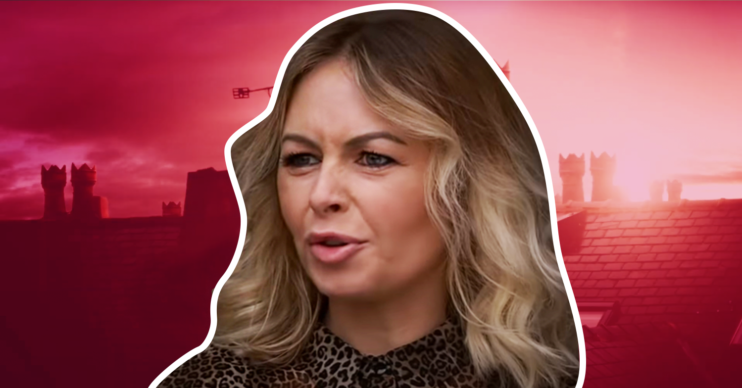 Coronation Street: Laura Neelan to cause trouble for Carla and Peter?

Laura has taken a liking to Peter's nephew Adam

Coronation Street introduced Laura Neelan earlier this year, as the ex-wife of Rick Neelan. But could she end up causing trouble for Peter and Carla?

Currently she is causing a stir for Gary Windass, who secretly murdered the loan shark last year.

However Laura actress Kel Allen has revealed she would like her alter ego to start working at the Rovers and stir up some trouble for couple Peter Barlow and Carla Connor.

Speaking to Entertainment Daily and other media at a virtual press event, the actress said: “I think if I was to choose any job for Laura she would be behind that bar pulling pints, taking tips and popping them in her bra. She’s that kind of girl isn’t she?

“She’d be swapping numbers with whoever comes through the door – if she knows what’s in their bank account.

“She’s for the money, she’s for an easy life. So that’s what I love about her. She’s such a great character that she’s so far from who I am as a person, that’s why she’s great to play.”

She continued: “I could definitely see her as a barmaid, I don’t think she’d be too great at sewing knickers or anything!

“This could really rock the boat, I know there’s a big fan following, being a fan myself, for Carla and Peter. So I think just to rock the boat and just stir it up a bit, to go for a bit of Peter.

“She can go around all the Barlows, try them all out.

“Carla and Laura, I could only imagine. There would be so many fireworks. It would be nice to see that now on the street a bit more with Laura, stirring the pot like she does. She creates chaos wherever she goes.”

What’s next for Laura?

Currently, Laura has her sights seemingly set on Peter’s nephew Adam Barlow. However what she doesn’t know is he is married to Sarah, and using her to find out information on Rick.

In this week’s Coronation Street, Sarah is furious to find her husband flirting with Laura. She’s even angier when he explains that Laura is Rick’s wife.

Can he explain what he’s been up to?