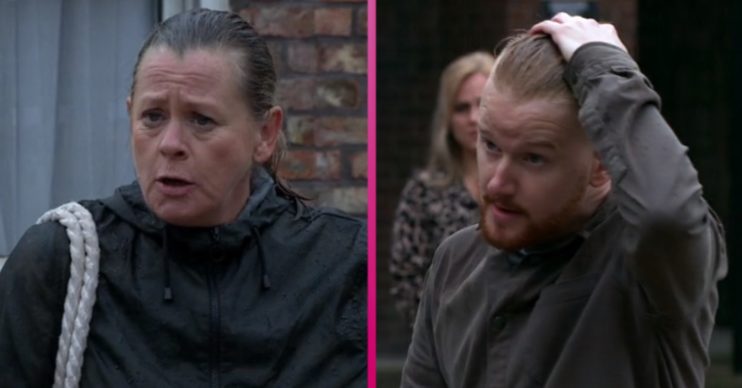 Coronation Street killer Gary Windass has finally been rumbled by Bernie Winters – she just doesn’t know it yet.

Gary is responsible for the deaths of Rana Habeeb and loan shark Rick Neelan.

Rana died on her wedding day after Gary collapsed the factory roof on her, while Rick was beaten to death and buried in a shallow grave in the woods.

While Gary seems to have gotten away with Rana’s death – with Carla Connor taking the blame for the dodgy roof – Rick’s disappearance is still looming over him.

Adam Barlow is determined to expose him but doesn’t have any firm proof.

In last night’s episode Gary smashed up Brian and Bernie’s metal detector after discovering they were going to the woods to find buried treasure.

He chased them out of the woods and then raged at them and left Brian too terrified to go back.

It looked as if Gary had got his way and scared off Brian and Bernie from finding anything about Rick’s grave.

Bernie has the evidence

But in the closing seconds of the episode, Bernie pulled something she had found out of her pocket – a watch.

Reading it aloud it soon became clear that this watch used to belong to murdered Rick Neelan.

“To Rick, Love from Laura,” it read on the back.

Viewers know Rick’s wife Laura has recently emerged on the cobbles and holds the key to proving Gary murdered him.

However Bernie has no idea she has proof of Gary’s evil crimes in her pocket.

And it puts her in the danger zone from him.

Could Gary kill her to keep his secret? Fans certainly think it’s a possibility.

One said: “Bernie signing her own death warrant #Corrie”

A second said: “Who is she going to give to, to be seen by Laura or the kid? Gary has just dropped himself in it big time.

“People are going to start putting the puzzle together along with his temper.”

A third said: “Ah it’s looks like Bernie might be on her way to rumbling Gary. What a twist that would be. #Corrie”

Next week time’s running out for Gary – but what will he do next?