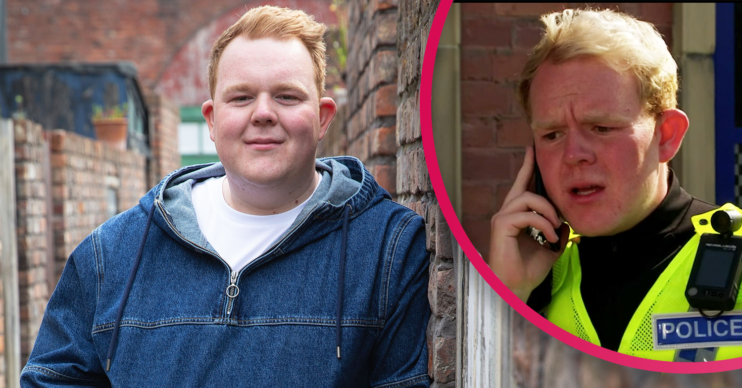 He has undergone a dramatic transformation

Following actor Colson Smith‘s transformation, the special police constable was seen on screen for the first time in months.

And it’s fair to say the results were staggering.

On-screen, due to a pause in the production of Corrie, Craig had only just begun his weight loss storyline.

However, a few weeks’ worth of episodes were stretched out to months, meaning Craig hasn’t been seen on screen in a long time.

Craig has lost so much weight! Looks like a totally different person!

But now filming has resumed, the extent of Craig’s transformation was revealed to viewers, leaving them stunned.

He was seen for a brief scene at the beginning of the episode at the police station.

One viewer said: “Craig has lost so much weight! Looks like a totally different person! Fair play to him!”

A third said: “Omgosh is that Craig in Corrie??!!!!! Wowzers. #coronationstreet”

The soap actor, 21, has undergone an incredible weight loss transformation over the last year.

And the star, who plays Craig Tinker on the ITV soap, is showing no sign of slowing down.

Taking to social media, he showed off his slim and toned legs as he posed in his gym’s mirror.

He told his followers: “4 days back in the gym. Never appreciated a foam roller more.”

Gyms in England only reopened on July 25 after months of closure due to lockdown.

However, he certainly didn’t let the lack of gyms delay his progress.

Throughout lockdown he shared various home workout and run updates – and he had a meal prep service deliver his food to make it easier for him.

While his transformation is incredible, Colson hasn’t revealed exactly how much weight he has lost.

However, he did tell fans that he had dropped “about ten stone” since beginning his journey.

He said of his changing look: “We are in direct continuity, but I’ve almost lost about ten stone since we left work so I’m not sure that [my hair] is going to be the biggest of their issues.”

Colson added: “I might be wearing a wig and a fat suit when we go back.”