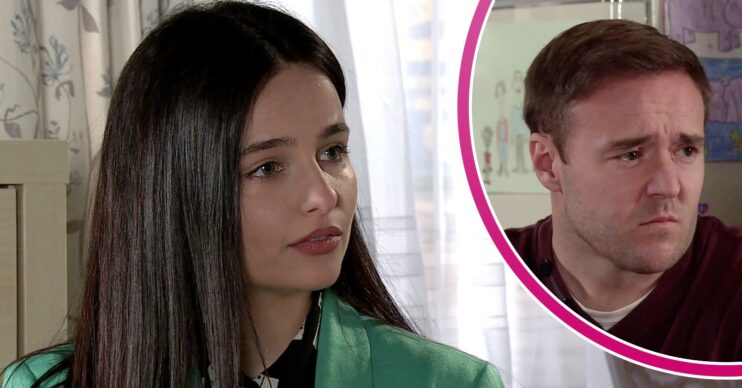 Coronation Street fans are predicting that Alina will return with Tyrone‘s baby now he and Fiz are back together.

Pregnant Alina left the cobbles last year after breaking up with Tyrone.

As Alina told Tyrone she wasn’t pregnant, he has no idea he has another child out there.

But fans are predicting that Alina will return soon.

Read more: OPINION: Coronation Street: Now is the perfect time to bring back Alina and her baby

Last year, Tyrone ended his relationship with Fiz as he had feelings for Alina.

Tyrone and Alina quickly began a relationship, moved in together and she fell pregnant.

Tyrone’s stepdaughter (Fiz’s daughter) Hope made it clear she didn’t like Alina and wasn’t happy about the baby.

She broke into Tyrone and Alina’s flat and set fire to the baby’s cot, but didn’t realise Alina was asleep in bed.

Alina was taken to the hospital and it was revealed she suffered a miscarriage.

After Alina found out that Hope had started multiple fires before, she was annoyed at Tyrone for not telling her the truth.

Alina planned to go back to Romania after breaking up with Tyrone, but she told him she was pregnant.

As Alina was leaving, Tyrone tried to convince her to stay with their baby. However she explained that it was a false alarm and she wasn’t pregnant.

Tyrone let Alina go, but when sat in the airport by herself she refused alcohol and asked for tomato juice.

She began rubbing her stomach, hinting to viewers that she was pregnant.

Alina hasn’t returned to Weatherfield and since her departure, Tyrone has tried to win Fiz back, but she was in a relationship with Phill Whittaker.

Last week Fiz and Phill got married, but she dumped him at their reception.

Fiz then went to see Tyrone telling him she still loved him before they shared a kiss.

Now it looks like Fiz and Tyrone are back together, fans are predicting Alina will return soon with Tyrone’s child.

Alina will be back in 2 weeks mark my words #Corrie

Ok I’m just gonna say it. Fiz and Tyrone shouldn’t get back together. She should be with Phil. Alina is bound to be back soon with the baby…. #Corrie #coronationstreet

Two weeks? Means Alina’ll be back in the same time frame then? #Corrie

Alina will soon be back with a baby and idiot Fizz will lose it big time #Corrie pic.twitter.com/ySto9a82EV