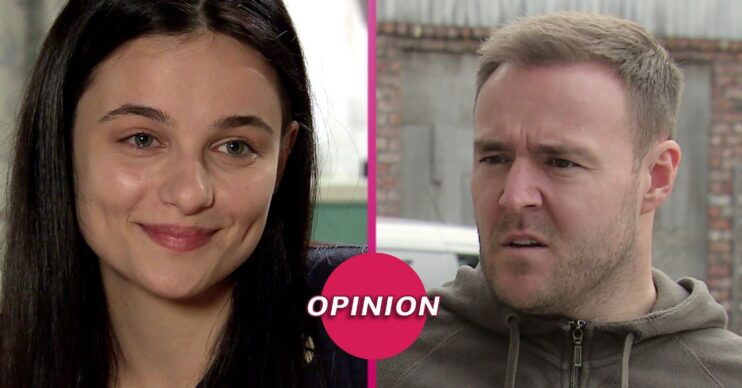 OPINION: Coronation Street: Now is the perfect time to bring back Alina and her baby

Now Fiz and Tyrone are back together, lets throw another hurdle their way!

Coronation Street shocked viewers last year when Tyrone Dobbs dumped fiancée Fiz, who he had been with for years, to be with Alina Pop.

It was the affair that we didn’t see coming and while some viewers loved it, other didn’t so much.

However Tyrone and Alina’s relationship ended as quickly as it began.

In September 2021, she left Weatherfield to return to Romania, but was hiding a pretty big secret… she was pregnant with Tyrone’s child.

Will she ever return? And when is the right time to bring her back?

This is what Entertainment Daily writer Charlotte Rodrigues thinks…

Tyrone and Alina’s affair always kind of baffled me a bit.

It seemed odd how after everything Fiz and Tyrone went through that he would just one day decide he was going to leave her for a 23-year-old that he barely knew.

However it’s led to some good storylines.

Obviously the last time we saw Alina she told Tyrone she was pregnant with his baby.

She then made the decision to go back to Romania, which is where she was born, to be with her family.

Tyrone tried to stop her, but when she told him she wasn’t actually pregnant, he let her go as the relationship was over.

Then another plot twist, it was revealed that Alina WAS still pregnant.

Ever since Alina left, Tyrone has been trying to win Fiz back but she seemingly moved on to Phill Whittaker.

This week, the week Fiz and Phill were going to get married, Tyrone professed his love to Fiz. But she told him she would be marrying Phill as she could no longer trust him after what he did.

Fiz and Phill had their wedding and it seemed like Fiz got her happy ever after.

Of course she didn’t, it’s a soap.

Fiz suddenly realised AFTER buying a house with Phill, marrying him and letting him into her children’s lives that she actually didn’t love him.

Couldn’t have done that before the wedding Fiz? No? Okay.

Fiz then ran back to No.9 to tell Tyrone she still loved him and they shared a passionate kiss. How sweet!

Now it’s time to bring Alina back with a baby bombshell to ruin the joy!

Why is it the right time to bring back Alina?

Alina left the cobbles in September last year and if she was in the early stages of pregnancy, she probably would’ve just recently given birth.

So Tyrone has a child out there that he has no idea about.

Bringing Alina back would just throw a massive spanner in the works. Tyrone and Fiz think things are gonna go back to how they were? Nope!

And to be honest, it would be the karma Fiz deserves for hurting poor Phill like that.

If Alina came back with a baby, it would spark a lot of anger.

Evelyn wouldn’t be impressed and I don’t think Hope would be happy considering how much she disliked Alina.

It would also be interesting if Alina came back with her whole family, have them move on to the street so Tyrone could be close to the baby.

Honestly Alina returning to Romania secretly pregnant was a brilliant idea as it just opens up a lot of potential and it would be great to see Ruxandra Porojnicu return to the show.