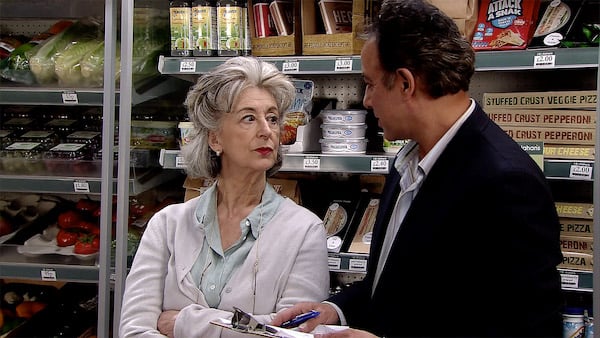 Coronation Street’s Maureen Lipman has won an army of new fans for her role as caustic battle-axe Evelyn Plummer in the ITV soap.

Some have even heralded Tyrone’s grandmother as the ‘new Blanche Hunt’, and have called for her to become romantically involved with beloved character Roy Cropper – praise indeed!

Viewers know she joined the cast of the Manchester soap in September 2018, and her antics – including starting an illegal betting operation in Dev’s corner shop – has left fans in stitches.

But some believe the actress – and the character – is being wasted.

Writing on Digital Spy Forums, one used said: “Whenever I happen to catch Corrie, I just end up feeling bad for Maureen Lipman. She’s far better than the ‘comedic’ crap Corrie has evolved into and occasionally I’ve cringed at the stuff they make someone of her talent do.”

Another agreed; adding: “I feel bad for her when she has to do comedy with Dev.”

A third said: “I really like Maureen in Corrie. I think she’s doing the best she can with mediocre material.”

However others praised the role, with one writing: ” I think she has found her groove in this role, long live Evelyn Plummer, as we need a battleaxe with a secret heart of gold in the show.”

“Maureen Lipman’s scenes have been fantastic,” enthused another. “One of the few bright spots about the show recently. Having said that, it has picked up lately with Daniel and Sinead’s storyline, depressing as it is to watch.”

The English playwright, who died in 2004, wrote 129 early episodes of the ITV soap.

Maureen, meanwhile, has appeared in Roman Polanski’s Oscar-winning film The Pianist, Educating Rita and the musical Oklahoma with Hugh Jackman.

She’s also appeared in numerous TV series, including Vicar Of Dibley, Midsomer Murders, Holby City, Casualty and Doctor Who – as well as those famous BT commercials.

At the time of the announcement, Corrie boss Iain MacLeod said he was “beyond thrilled”.

He described Evelyn as a “great new character” saying he was so pleased she would be “played by someone of Maureen’s pedigree”.

“Evelyn is eye-wateringly withering and will add a fresh dollop of northern humour to the show as she turns Tyrone and Fiz’s lives upside down,” he added.

Do you think Maureen Lipman is wasted in Corrie? Leave us a comment on our Facebook page @EntertainmentDailyFix and let us know what you think!