Evelyn, who came into Corrie last year, has been up to her usual tricks recently.

When Dev went off to India to see his ill Uncle Ravi, he left battleaxe Evelyn in charge of his corner shop. 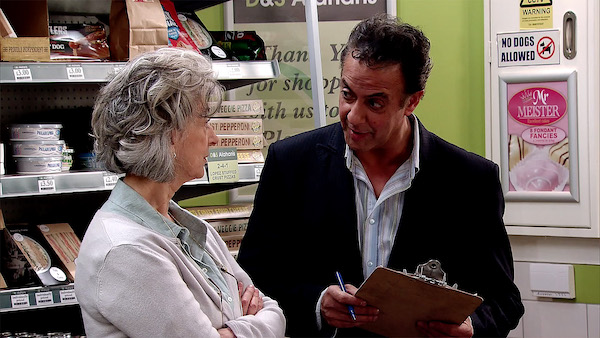 Dev left Evelyn in charge of his shop whilst he was in India (Credit: ITV)

Whilst Dev was gone Evelyn lowered prices to items she wanted to buy and started an illegal betting operation in the shop.

Evelyn would receive information from footballer James Bailey about which players were injured or unable to play and would take bets off the local residents.

When Dev returned, Tim let slip about what Evelyn had been up to and Dev soon realised Evelyn had marked down a few prices as well.

However, in last night's episodes (August 14 2019) Dev was shocked to realise that Evelyn had actually made a profit from the marked down goods. 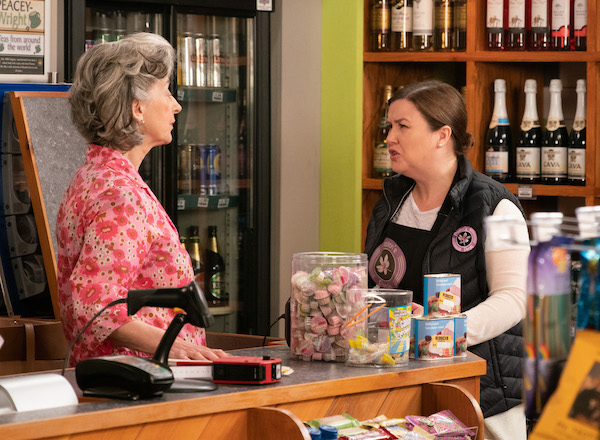 Evelyn had been marking down prices in Dev's shop and running an illegal betting operation (Credit: ITV)

Read More: Fed up Coronation Street viewers brand Robert a snake as she proposes to Vicky with Michelle's ring

He soon showed up at Tyrone's and asked Evelyn to come back to work for him at the shop.

I love Evelyn so much. Please Corrie keep her for as long as you can.

Of course, Evelyn drove a hard bargain. After consulting her young granddaughter, Ruby, Evelyn said she would come back for a raise and wanted £12 an hour.

Dev agreed as long as Evelyn stopped her gambling operation.

Later, Evelyn also helped Ruby out when Tyrone said the little girl had to eat all her tea before she could have pudding.

When his back was turned, Evelyn ate some of Ruby's meal for her!

Viewers love 'hilarious' Evelyn and have begged for her to stay in the soap.

I love evelyn so much. Please #Corrie keep her for as long as you can. She's is a genius and hilarious character.

When you’re unsure about a character when they first come into the show, and then you end up loving them.

#Corrie Evelyn is amazing with the one-liners

Dev - “I’m sorry to be interrupting your family dinner”