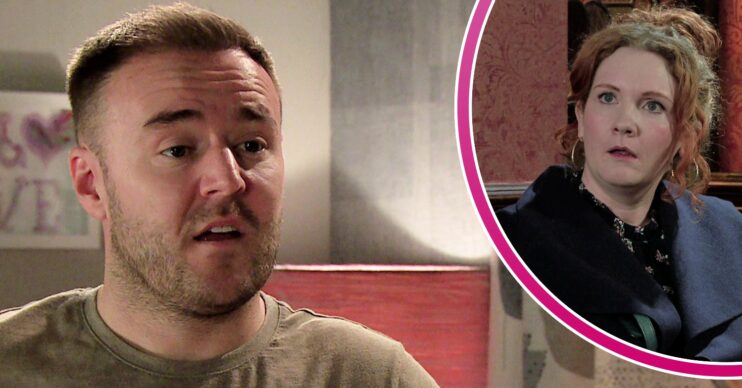 Tyrone decided to get his tattoo covered

Last year Tyrone got a matching tattoo with then-girlfriend Alina Pop. However now he’s back with Fiz, it was clear the tattoo was bothering her.

But Tyrone decided to fix the problem by getting the tattoo covered.

Last year, Tyrone left his fiancée Fiz to be with 23-year-old Alina Pop.

Tyrone and Alina very quickly moved in together and even ended up getting matching tattoos.

The tattoo had the Union flag and a Romanian flag with the initial T and A.

However Tyrone and Alina went through a lot during their short relationship with Hope starting a fire in their flat and Alina suffering a miscarriage.

Eventually Alina found out that Hope had a past of starting fires and grew tired of Tyrone keeping secret.

She left him and went back to her family in Romania.

Recently Fiz and Tyrone got back together after Fiz dumped her husband Phill at their wedding reception.

Fiz and Tyrone decided to go to couples therapy, so they don’t make the same mistakes as before.

However it became clear Fiz was bothered by the fact Tyrone still had a matching tattoo with his ex-girlfriend.

Later Tyrone went out and came home, revealing he had got the tattoo covered with a picture of Fiz’s face.

He kept the T but had Fiz’s name put in, however the tattoo artist spelt her name wrong.

Fiz is usually spelt with one ‘z’, but the artist spelt it with two.

Fans were completely shocked by the tattoo with one calling it ‘grim.’

Tyrone that tattoo is grim 🤣😭🤣 looks like he has the grim reaper on his leg #corrie pic.twitter.com/RcKkZ6UIJH

Tyrone really needs to get rid of that tattoo. #Corrie #CoronationStreet @itvcorrie

What do you think of Tyrone’s tattoo?