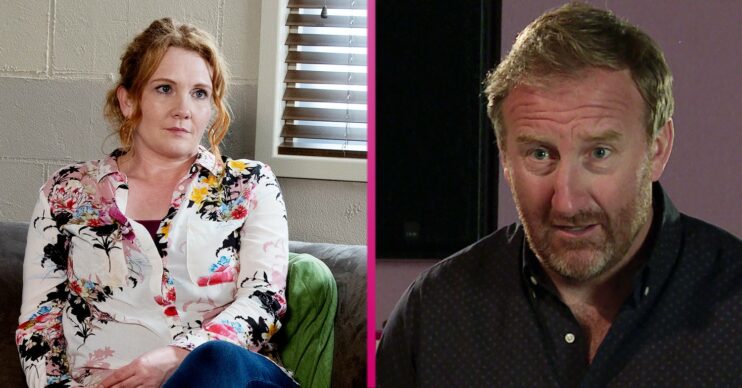 Coronation Street spoilers: Fiz and Tyrone caught out by Phill

Coronation Street spoilers for next week reveal Phill starts to realise his attempts to win back Fiz aren’t working.

However it looks like he’s about to find out the real reason Fiz left him on their wedding day.

Tyrone returns home from his break with Phill.

He admits to Fiz that he didn’t make any progress with trying to convince Phill to stop trying to win her back.

He reveals that every time he approached the subject of marriage, Phill got upset.

Will it all go to plan?

Fiz goes to Roy’s Rolls for a coffee and ends up letting slip that she loves a man in a uniform.

Phill overhears and turns up at the factory dressed as Richard Gear from An Officer and a Gentleman.

Fiz is horrified when Phill goes to lift her up, but his back goes and he drops her.

She helps Phill get to A&E and explains to the receptionist that he’s hurt his back.

In the waiting room, Phill realises his attempts to win Fiz back isn’t working.

He promises Fiz that he’ll sign the annulment forms.

Phill finds out the truth

The next day Fiz confirms she’s meeting Phill in the café as he promised to sign the annulment forms today.

But when she gets there he asks if she will go to a couples therapy session with him, leaving her shocked.

She gets another massive shock when it turns out the therapist they’re seeing is the same one she is seeing with Tyrone.

Is her secret about to be revealed?

Later Evelyn decides to have a chat with Phill but he gets distracted realising he left his phone at the therapist’s office.

Meanwhile Tyrone and Fiz go to see the therapist again, but the therapist makes it clear she’s not impressed with their lies and deceit.

Suddenly there’s a knock at the door and Phill comes in looking for his phone.

Will Phill still go through with the annulment?

After some wise words from Evelyn it looks like Phill will still give Fiz the annulment.

But a farewell chat with Hope puts a different light on things. Will he change his mind?