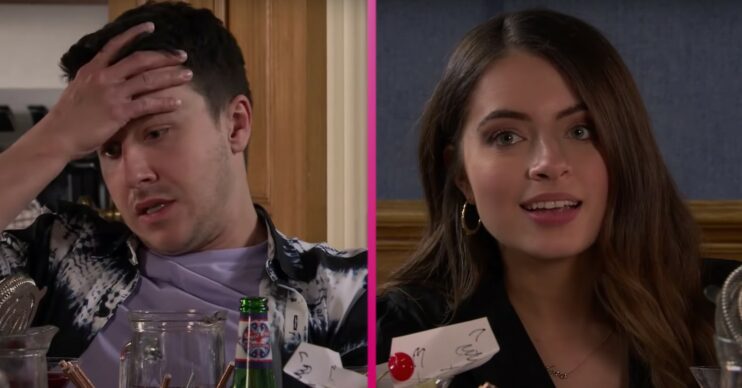 Coronation Street fans were left horrified after Daisy Midgeley plied Ryan Connor with booze so she could sleep with him.

Barmaid Daisy tricked Ryan into tasting her new cocktails until he was too drunk to stop her.

In a clearly orchestrated plan, she manipulated him into leaving his phone so his girlfriend Alya wouldn’t be there to help him.

What happened with Daisy and Ryan in Coronation Street?

Last night, Corrie viewers watched as she led him into the Rovers’ back room after his gig was mysteriously cancelled.

There, she gave him increasing amounts of booze while pretending to drink herself.

But as Ryan got increasingly drunk and vulnerable, Daisy pounced, revealing her true plan.

She said: “I find it really hard to make friends.

“Girls hate me because of the way I look and boys only want one thing from me. But you’re different.

“You’re so easy to be with and you get me, and not many people do.”

As Ryan became increasingly vulnerable, Daisy then headed out to make sure Alya wouldn’t find him.

She clashed with Ryan’s girlfriend in the Rovers, hiding the fact Ryan was just feet away from her.

And, after sending Alya packing, a sober Daisy went back to finish her vile plan.

With it clear that Ryan was too drunk to consent, Daisy groped him and made her move.

“You need to forget about her,” she said.

“Which one are you going to pick – boring naggy girlfriend or night of wild passion? I wasn’t talking about the cocktails.”

But after Daisy groped him, viewers were furious at the scenes branding them “sickening”.

One said: “Wow. What Daisy is doing to Ryan is truly sickening. Is there anything more cruel than getting someone under the influence of drink and coercing them into bed when they’re not in the right state of mind?”

A second said: “Daisy is basically trying to date rape Ryan. It’s so horrible and she’s so sleazy.”

A third said: “Daisy is a predator. You can tell she planned this from the start plying Ryan with alcohol so he couldn’t even think straight.

“He didn’t cheat on Alya. Daisy sexually assaulted him when he was too drunk to even consent.”