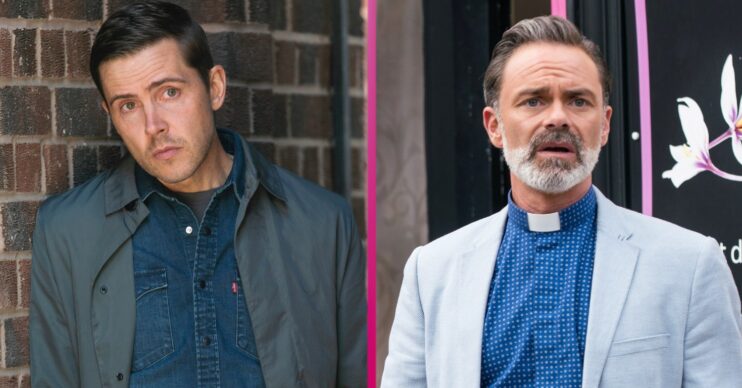 Coronation Street SPOILERS: Todd steals from Billy to pay off Will

Will suggests Todd steal from Billy

Coronation Street spoilers reveal Todd steals from Billy to get the money for Will. Will Billy find out the truth?

Recently Will came back to the cobbles and demanded money from Todd. In return he wouldn’t tell Billy about his lies and plot to split up Billy and Paul.

In next week’s scenes Andy the binman calls at the undertakers and hands Todd £7k in cash.

He explains that a local Big Issue seller called Matty has died and they had a whip round for his funeral.

When Andy leaves, Todd places £2k in the till and stuffs the other £5k in a marble urn.

Todd tells George about Matty’s funeral, how he was moved by his situation and agreed to do a £7k funeral for £2k as it’s all they managed to raise.

Soon Todd is horrified when the deceased’s brother, Mr Hendricks, has collected the marble urn where the £5k was hidden.

However Mr Hendricks laughs in his face and leaves.

Soon Billy summons Todd, Summer and Will to the Bistro and tells them he’s celebrating as he’s had the go ahead to spend £7k on a heat pump for the halfway house.

Coronation Street spoilers: Todd steals from Billy to pay off Will

Meanwhile Paul is shocked to find out that he hasn’t been paid. In the builder’s yard, Ed admits that he has a cash flow problem.

Todd meets up with Will and tells him that he will need his help to steal the heat pump.

However Todd fails to notice Will steal his engagement ring. When Billy notices it’s missing, Todd panics and says he’s taken it to be resized.

Later Todd demands his ring back from Will, but he tells him that he’ll get the ring back when he hands over the cash.

Having lured Ed out of the builder’s yard on the promise of a lucrative job, Todd borrows the undertakers van with the intention of using it to transport the stolen heat pump.

As Todd sets about stealing the heat pump, Ed returns to the yard.

He hears and noise and Todd is quickly forced to hide, but Ed soon locks up and leaves.

Read more: The Queen in Manchester as she visits Coronation Street set

When Ed reports the heat pump as stolen, Craig wonders if he’s fallen out with anyone recently and Ed immediately suspects that Paul could be behind it.

He questions him about the stolen heat pump. Billy and Todd watch as Craig manhandles an angry Paul into the a police car.

The police question Paul about the stolen heat pump.

Having kept £1k of the heat pump money for himself, Todd tells Billy and Summer that he got a bonus from work and he’s going to spend it on a family holiday.