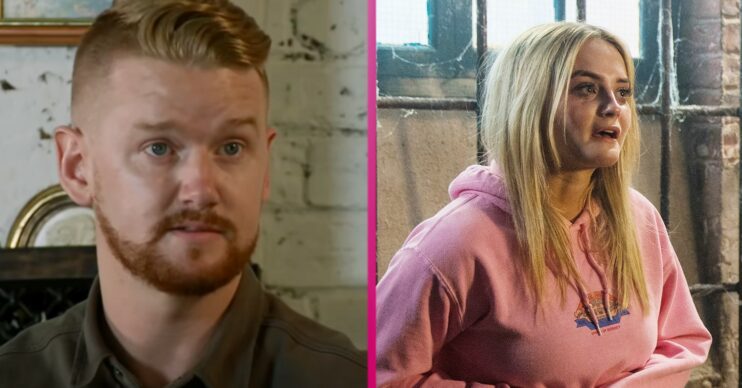 Kelly was taken by someone Rick worked with

Coronation Street fans called out Gary for leaving his phone at home when he knew Kelly, who is in his care, is missing.

Kelly, who lives with Gary and Maria, was recently kidnapped by her dad’s former business partner Kieron.

Gary and Maria were concerned when they realised Kelly didn’t come home, but fans were baffled as Gary left his phone unattended, knowing she was missing.

Recently Kelly has been trying to return money to her dad, Rick‘s, former clients.

Kelly knows her loan shark dad ripped people off and after his death, he left her his money.

Kelly decided to give back to the people her dad took money from and last week she took cash to a client called Ross.

After Kelly left, Ross made a phone call and later it was revealed to viewers that Kelly was being kept in a cold, dark cellar.

In last night’s episode (Monday, July 18) Ross came down to the cellar with Kieron, who revealed he was her dad’s former business partner.

Kieron explained to Kelly that Rick caused him to lose everything and he wanted back the £50k took from him.

Kelly tried to tell him that she didn’t have the money, but he refused to listen.

When Gary found out from Aadi that Kelly had gone to see one of her dad’s clients the day before, he realised she could be in trouble.

But when Gary received a message from Kelly asking him to let her mum know she’s okay, he knew something was wrong.

Later Kelly saw Kieron left her phone out on the side.

Through a cracked window in the cellar, she used voice activation to try and call Gary.

She managed to get the phone to ring Gary, but he had left his phone on the kitchen counter and gone out.

Soon Kieron came along and saw what Kelly was up to.

But fans were quick to call out Gary saying he shouldn’t be leaving his phone, knowing that Kelly was missing and could be in danger.

Gary, WTF are you doing not having your phone on you at every single second of the day when you have a MISSING CHILD?! 🙈#corrie #coronationstreet

Don't you just love it when soap characters are glued to their phones except when it's an emergency!*! #Corrie

#Corrie Gary is desperate to hear from Kelly, so he'd definitely bugger off and leave his phone behind.

So, you know a young girl is in trouble and you leave your phone behind yeah right!! #corrie

You're desperately worried about somebody, so that's the single time when you leave your phone at home!*! #Corrie

Soon Kieron called Gary himself and demanded £50k if he wants Kelly to stay alive.

Will Gary be able to help her?