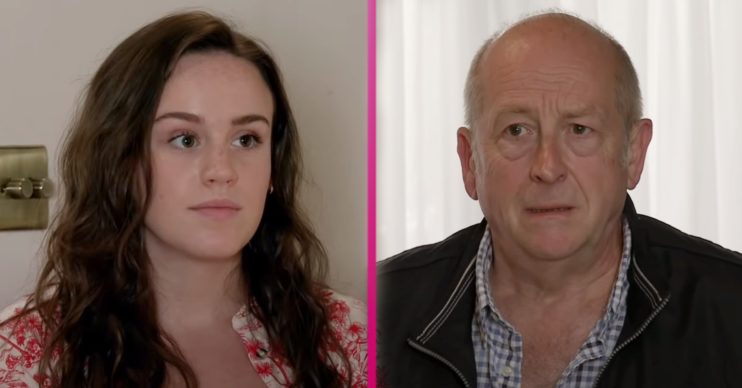 Coronation Street fans have begged for Faye to see through Geoff after she caught him verbally attacking her stepmum Sally.

Geoff abused his wife Yasmeen for months, but she ended up getting sent to prison after stabbing him in the neck.

But the incident has left Geoff’s family divided with his son Tim and granddaughter Faye siding with him and Tim’s wife Sally siding with Yasmeen.

Last week, Yasmeen’s granddaughter Alya was becoming fed up of working with Geoff.

Hearing that Alya was considering selling her share in the business, Sally offered Alya her and Tim’s wedding money.

Although Geoff gave them the money, it was from Yasmeen’s business account.

Alya was grateful however Geoff refused to be bought out. After Tim found out Sally gave away the money, he was furious with her. Meanwhile Geoff was loving every moment.

Later Geoff came into Sally’s house and the pair got into an argument. But what Geoff didn’t realise was that Faye was on the staircase and could hear everything.

Geoff said to Sally: “Why are you so shocked that blood is thicker than water?” That dads and lads have an unbreakable bond? My son will always have my back.

“I walk on water, whereas you just grow wrinklier and more boring by the day.”

But as Faye made her presence known, she said to him: “Granddad, that’s horrible!”

Quickly realising his mistake, he began apologising to Faye. But he then claimed that Sally had been abusing him for months.

Hope Faye is finally seeing what Geoff is like.

He apologised to Sally for his cruel words, but viewers are hoping Faye won’t be fooled and will see through his fake apology.

hope Faye is finally seeing what Geoff is like #Corrie

I really hope that this is the beginning of Geoff's downfall now that Faye has seen how horrible Geoff can be. Surely Faye cant believe that Yasmeen abused him for all those months. She has Anna Windass for a mother so unlike Tim she is not delusional #Corrie

Faye has just copped Geoff being horrible to Sally. Come on Faye you need to see through him now #Corrie

Do you think Faye is finally seeing Geoff’s true colours? Leave us a comment on our Facebook page @EntertainmentDailyFix and let us know what you think!